In part 1 of “Where Does Placer Gold Come From?” we discussed the origins of gold and how it appeared on earth.  Now we’ll discuss how it moves into mineable deposits.

So if gold is evenly spread through the crust how does it become concentrated?  There are several natural processes that allow this to happen and they are all driven by the same force, plate tectonics.  Plate tectonics is the force that moves continents, creates mountains and most volcanoes, and of course earthquakes.  The image below shows the current tectonic plates and their names. 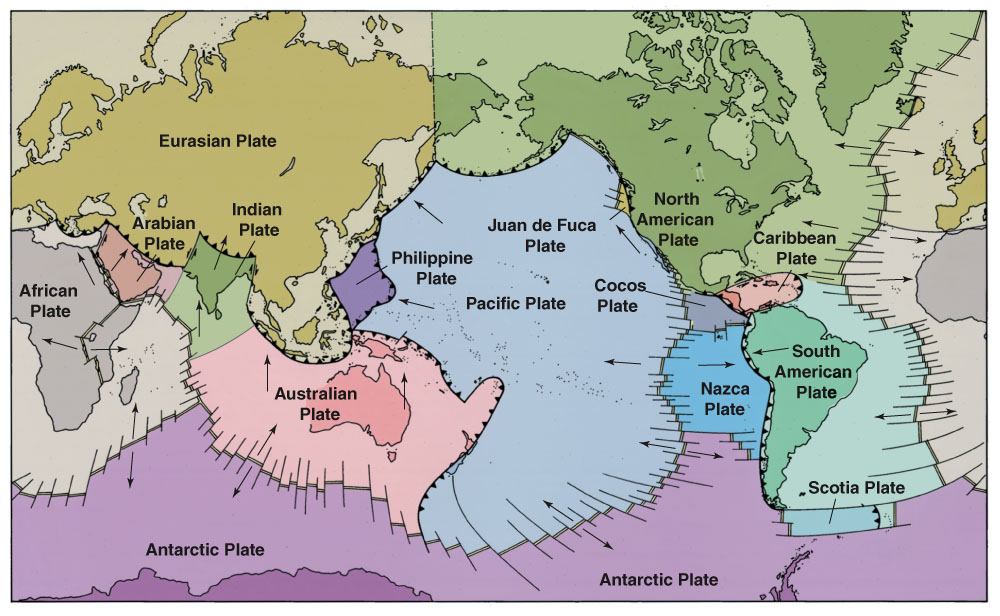 The plates are constantly moving, crashing into each other and subducting, they are pushed by convection currents in the mantle.  In the distant past there have been several supercontinents where all the continents had come together to from one.  Past supercontinents have names like Rodinia, Godwana and Pangea, it is predicted that a new supercontinent will occur in the next 250 million years.

At the boundaries of these plates is where the excitement happens.  It is at these areas such as the West coast of North America where volcanic processes squeeze gold into veins.  There are two main ways that this happens.  Orogenesis (mountain building) takes place as the force of two plates hitting each other forms mountains as the edges of the plate buckle and slide.  In the mountain forming process rock is squeezed to the point of breaking and creates fissures and faults that extend deep into the crust.  These cracks allow heated and pressurized water to come up the cracks.

The other way is driven  by volcanoes forming from the subducted plate.  When the edge of the plate is far enough below the surface it re-melts and the newly molten rock builds up pressure.  This pressurized molten rock is what forms the volcanic chains inland from the subduction zone.  As volcanoes form they crack and fissure the surrounding rock and contribute to the same epithermal process. 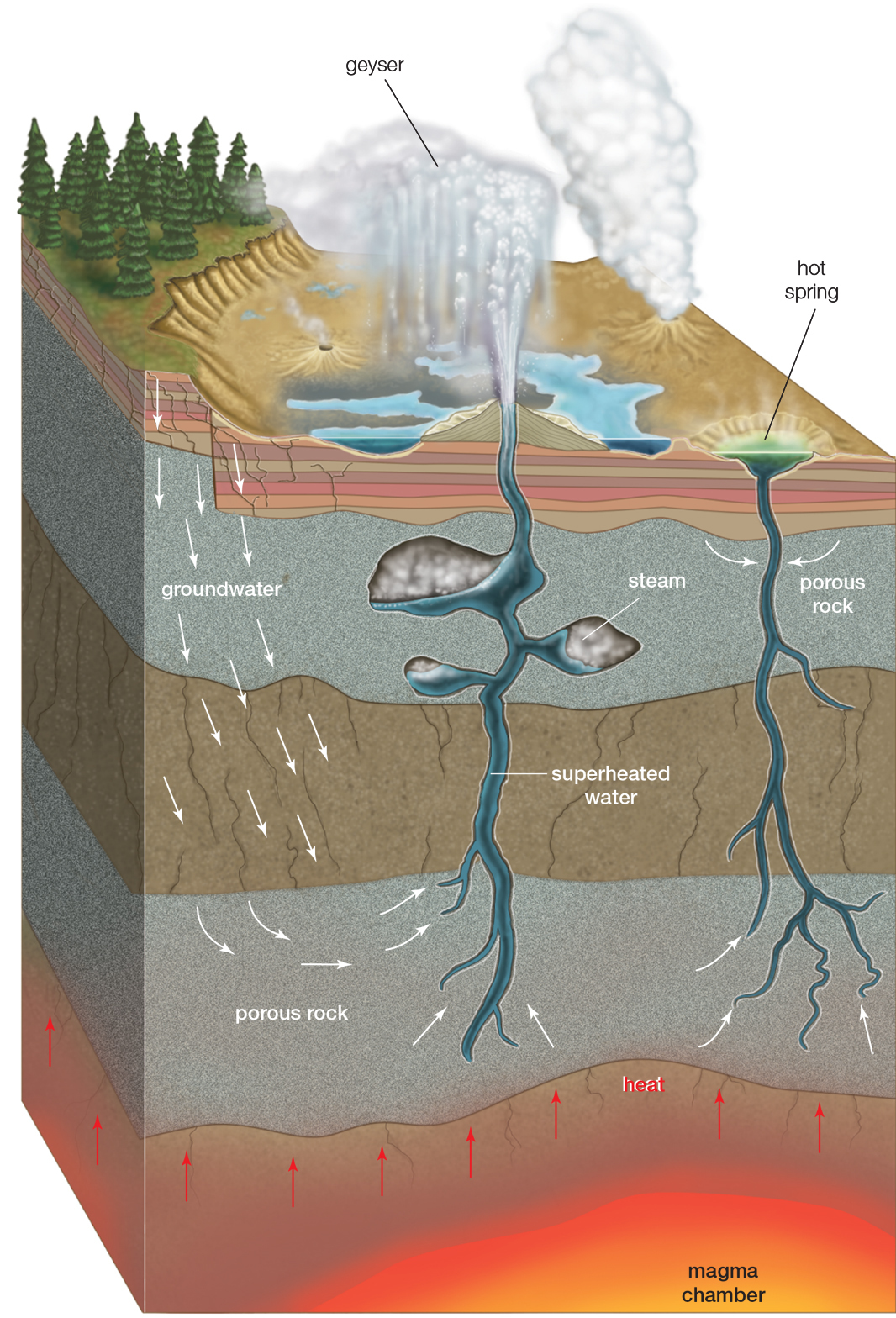 Imagine the rock as a sponge and when it is squeezed the water is expelled through the cracks.  It is actually the same way that hotsprings work but with more squeezing.  This kind of gold mineralization often takes place near volcanic or geothermal activity such as hot springs or geysers.  When the mineralized water cools it leaves behind the minerals in solid form which we then call a vein.  Typically we are looking for quartz veins.  Vein deposits are often called lode deposits in artisanal miner vocabulary.  Placer miners will often refer to the “mother lode” that is the quartz vein or veins that broke down into rich placers.

There are other hard rock gold deposits other than epithermal lodes.  There are Greenstone, volcanic massive sulphides, porphyry and Calrin trend deposits.  All of these depend on volcanism as well and occur in similar ways as described above.  Areas high in volcanoes and seismic activity are good places to look for gold.  The Pacific ring of fire is an area surrounding the boundary of the Pacific tectonic plate.  This area contains 3/4 of the worlds volcanoes and is responsible for 90% of the world’s seismic activity.  In the gold rushes of the 1800’s prospectors envisioned a world wide gold belt.  It wasn’t until the 1950’s that plate tectonics became an accepted scientific theory and decades later we mapped out that gold belt. 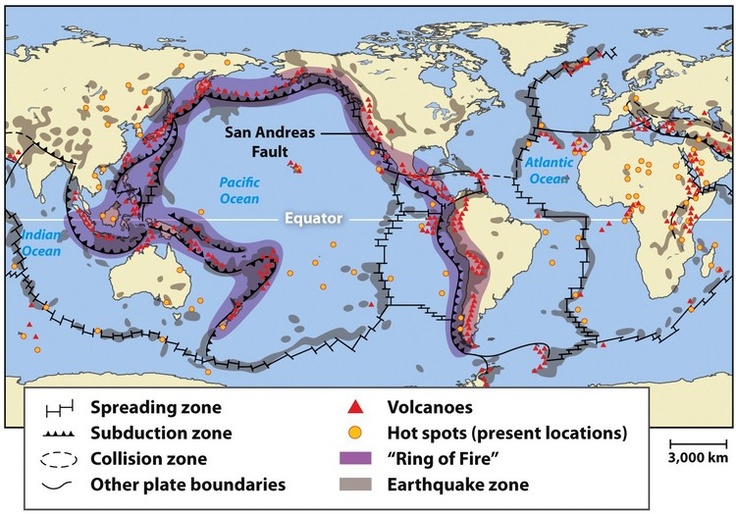 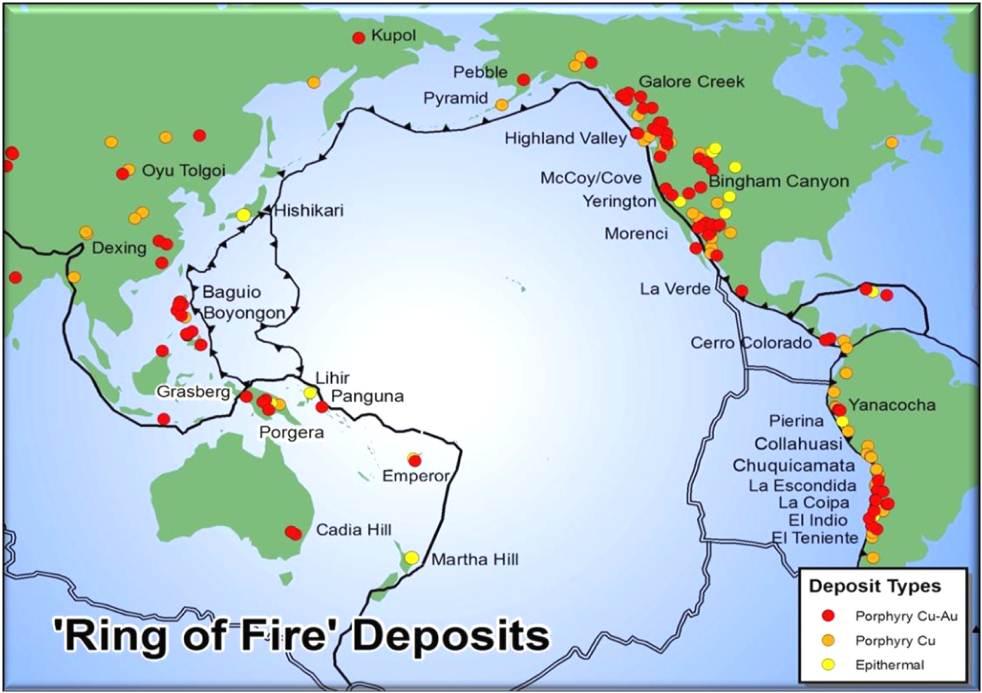 Of course not all gold is found in the ring of fire.  The largest known gold deposit on earth is in Witwatersrand, South Africa.  It is estimated that 50% of the gold mined on earth has come from this mine.  Witwatersrand is actually a huge placer deposit from 3 billion years ago.    In my next post we’ll finally get to the formation of placer gold deposits.  Stay tuned.

Check out Part 3 on how gold placers form:

Where does placer gold come from?
Southern Cariboo Prospecting Trip
How to Lose Your Shirt in Placer Mining
Deep Dive into Dowsing

3 thoughts on “Where Does Placer Gold Come From? – Part 2 Deposits”