Communication is essential for any placer gold operation to be successful.  It is also important for safety, in the event of an emergency communication can make the difference between life and death.

When out prospecting you are usually away from cell service.  So you need another way to communicate.  For person to person communication you can’t beat a handheld radio.  Even if you are within cell range radios are more convenient because of their field ruggedness and long battery life. 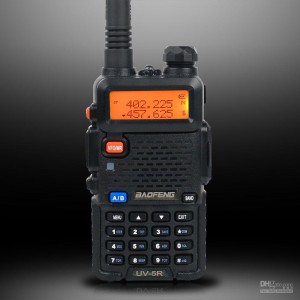 The Baofeng UV-5R is an entry level dual band ham radio manufactured in China.  You can buy these radios for under $30 on Amazon.com!  In larger commercial operations, and even smaller ones, companies will use much more expensive radios such as the Kenwood TK-3402.  Those radio retail over $300 and have way less features.  Also to program a Kenwood radio you usually have to take it to a dealer.  You can program them yourself with the right cable and software but almost everyone brings them to a dealer.

The Baofeng is a hidden gem.  After years of using much more expensive radios I had low expectations for a sub $30 Chinese unit.  I was blown away when I got these radios.  The biggest advantage that the Baofeng has is the ability to program radio frequencies on the fly.  When you roll up to a BC forest service road or active logging road they have the frequency posted at the start and you are supposed to call out the kilometers as you travel up the road.  The reason you want to do this is because there are large logging trucks and other equipment working up there.  When you are able to communicate with them you can prevent getting hit or trapped on a tight road with a logging truck.

You’ll wonder why other radios don’t allow field programming.  That is because you legally require a licence to transmit on many channels.  You could get in a lot of trouble with the Baofeng radio because you can program any channel that you want.  It is easy to listen in on police or ambulance channels.  I do listen to the police and other people some times for entertainment.  You can also transmit which is illegal.  That being said in the event of an emergency it would be worthwhile to contact help directly.

The range on these radios is also impressive.  They transmit at 4 watts, compared to the 5 watts of the commercial grade Kenwoods.  I’ve tested the range on the Baofeng radios at over 10km, they could potentially go further with good line of sight.  There is a dual watch feature which allows you to monitor two channels at the same time.  When you hit the PTT button it will transmit on the last channel that had activity.  There is a scan feature on the radio but it is very slow. 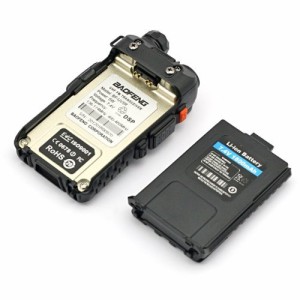 The stock battery will last up to 20 hours.  That is pretty decent, I wouldn’t expect any other radio to last longer.  I bought spare batteries for mine, they are also available for a reasonable price.  They are available for about $6.00 each at amazon.  The UV-5R features VOX capability which is usually only available on much more expensive radios.  VOX gives it the ability to trigger the PTT by your voice, basically hand free operation.

The Baofeng can easily be programmed to work with repeaters, such as the BC Forestry repeaters.  This feature adds to the versatility of this radio as an emergency communication device.  Programming on the handheld can be a little confusing although entirely possible.  I recommend using a PC and some free software.  There is a great program called CHIRP that makes programming these radios as easy as filling out a spreadsheet.  You can download CHIRP for free here.  There is also a great manual put together by the Chinese radio project. 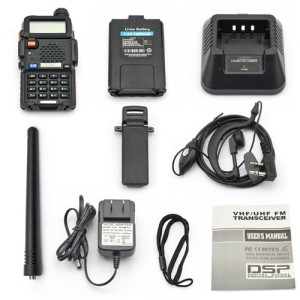 The UV-5R has memory for up to 128 channels.  It also has FM radio capability meaning you can listen to terrestrial FM radio stations.  There is a bright LED light included as well which is a nice feature.  The small form factor is kind of nice, I often forget I have it on me.  It has a belt clip but can fit nicely in a pocket as well.

In the box is the radio itself, the AC drop charger, the antenna, battery, belt clip, headset (works with VOX) and an english manual.

The Baofeng UV-5R is available on Amazon.com for an amazing price.

Baofeng has released a new version of this radio with 8 watts of transmit power.  That gives it much more range than most commercial handheld radios such as the Kenwood TK series which operate at 5W and sell for over $300.

Where Does Placer Gold Come From? – Part 2 D...
Top Ten Gold Rushes of BC – Part 2
We’re Now Offering Drone Services
Drone Mapping of a Coal Mine