Searching for a legendary lost gold mine is a little different from a typical prospecting trip.  Instead of picking an area based solely on its mineral potential our clues were derived largely from literature and first person accounts from decades ago.  It was half treasure hunt and half geological prospecting.  Before the first trip we did a lot of research reading up on the legend and accounts of previous explorers of the area.  Some background is mentioned in “Part 1 – The Legend”. We also consulted as many topo maps, aerial photos, geological reports and other information as we could get our hands on.  It always blows me away how much different terrain can be than what it shows on the map.  A topo map can show you several contours close together over 2 or 3 cm of paper but when you get out there it’s a different story. 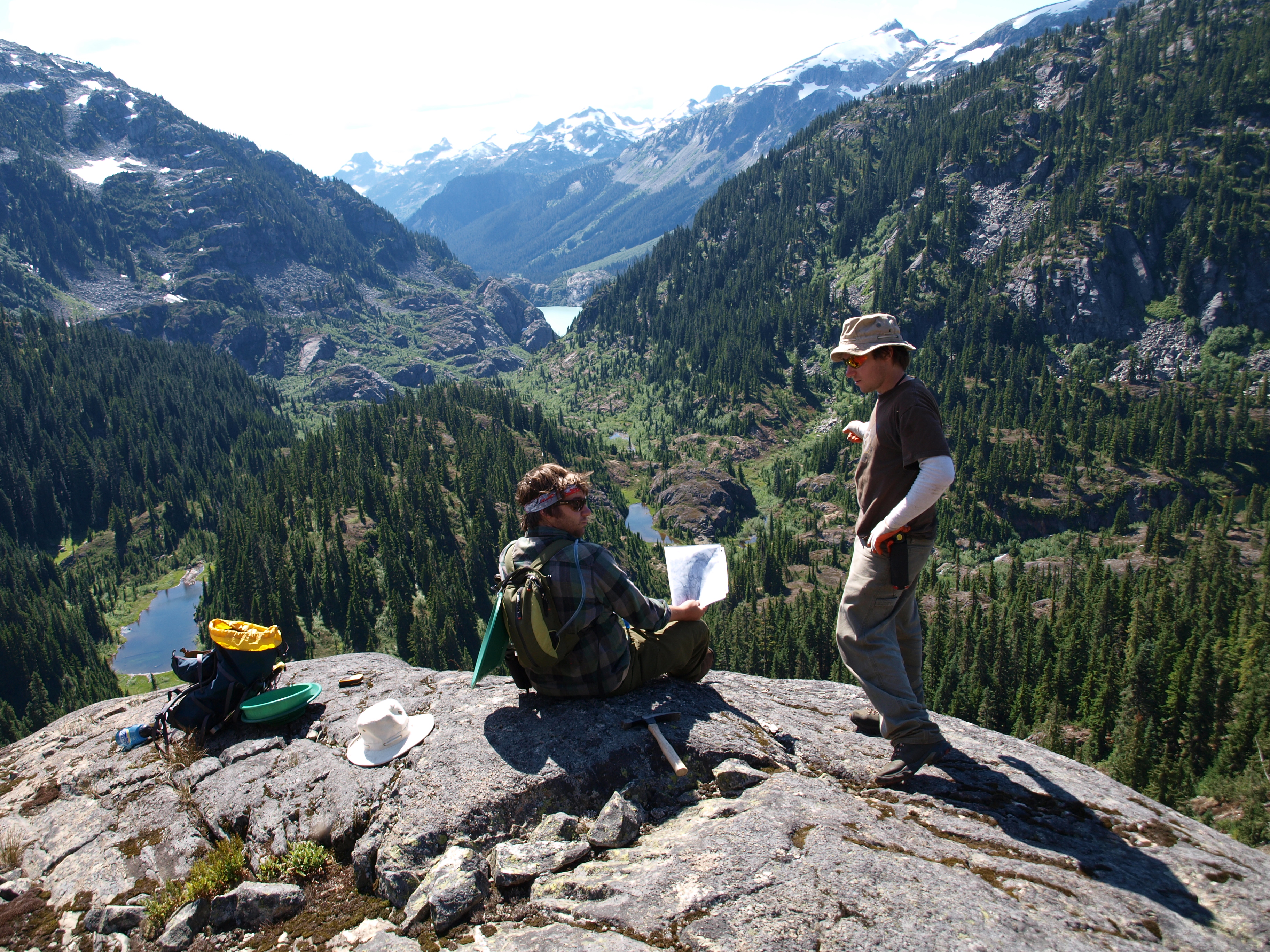 We chose to check out the area around the Terrarosa and Stave glaciers in Southern BC.  The legend says the mine is somewhere North of Pitt Lake, and Volcanic Brown’s last camp was found just below the Stave Glacier.  In the early 20th century there was a lot activity on Fire Mountain which is just East of that area so we know that gold has been found close by.  Geological maps show the boundary between several geological units at a large fault in the valley between the Stave and Terrarosa glaciers and we wanted to check that out. On both trips we took rock samples for lab assay and panned some of the best looking areas. 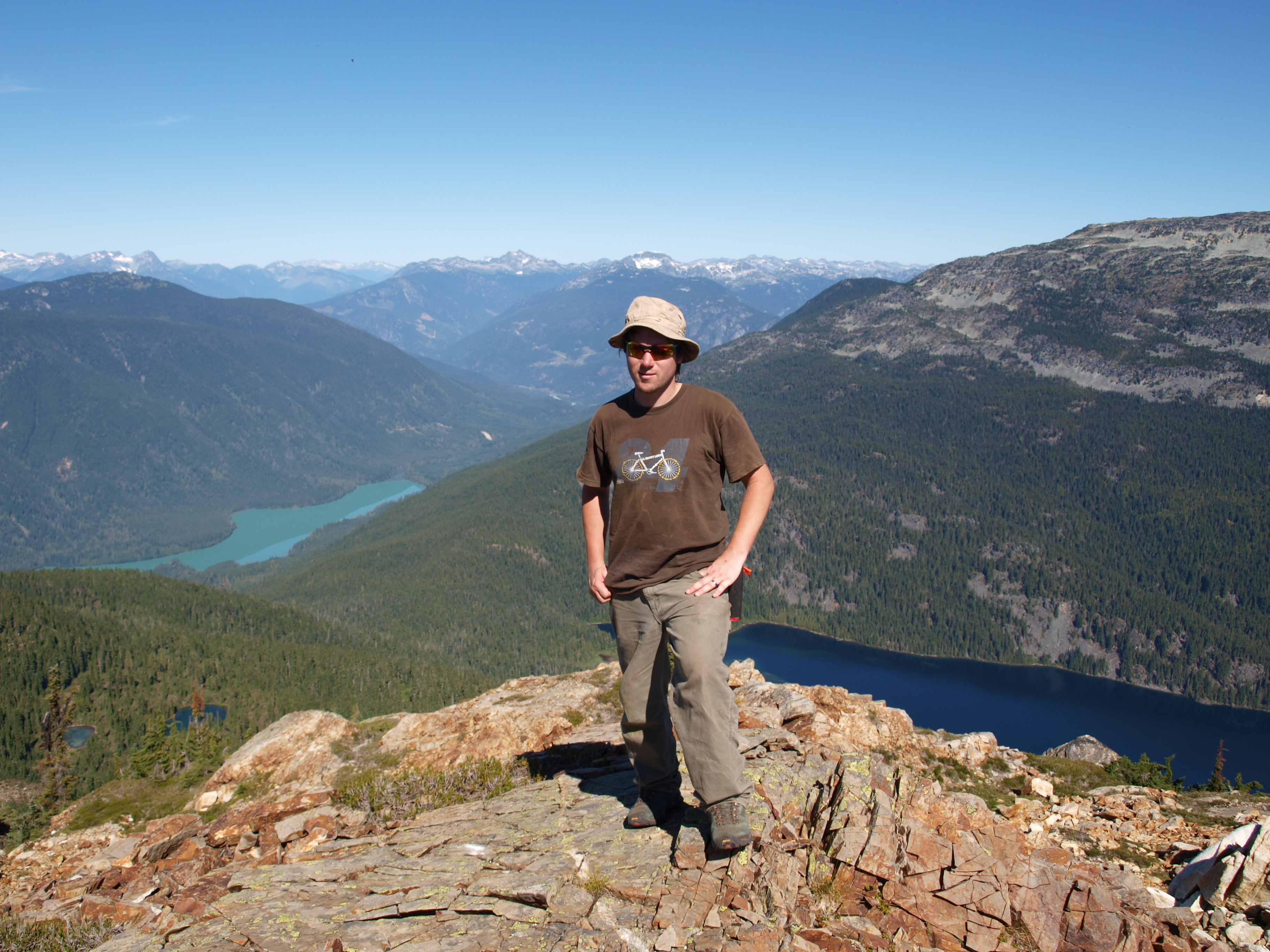 In 2012 we launched the first trip to the area with myself, my brother and a trusted friend.  To access the area we travelled up the side of Harrison Lake and took the 4×4 roads up to Fire Lake which is beside Fire Mountain.  Several historical high grade hard rock mines are located there.  From the end of the road we began our trek to our planned campsite at Terrarosa Lake.  The walking distance from the parking spot to Terrarosa Lake was about 17km. Right off the bat we had a very steep incline towards a ridge that would keep us in the alpine as we headed towards the lake.  I much prefer alpine over bushwacking up creeks.  Its a bit of a push to get up there but no real vegetation to deal with once you do.  This ridge offers amazing views of Glacier Lake and the mountain peaks all around.  You can see several large glaciers from up there.  Non stop postcard quality views. 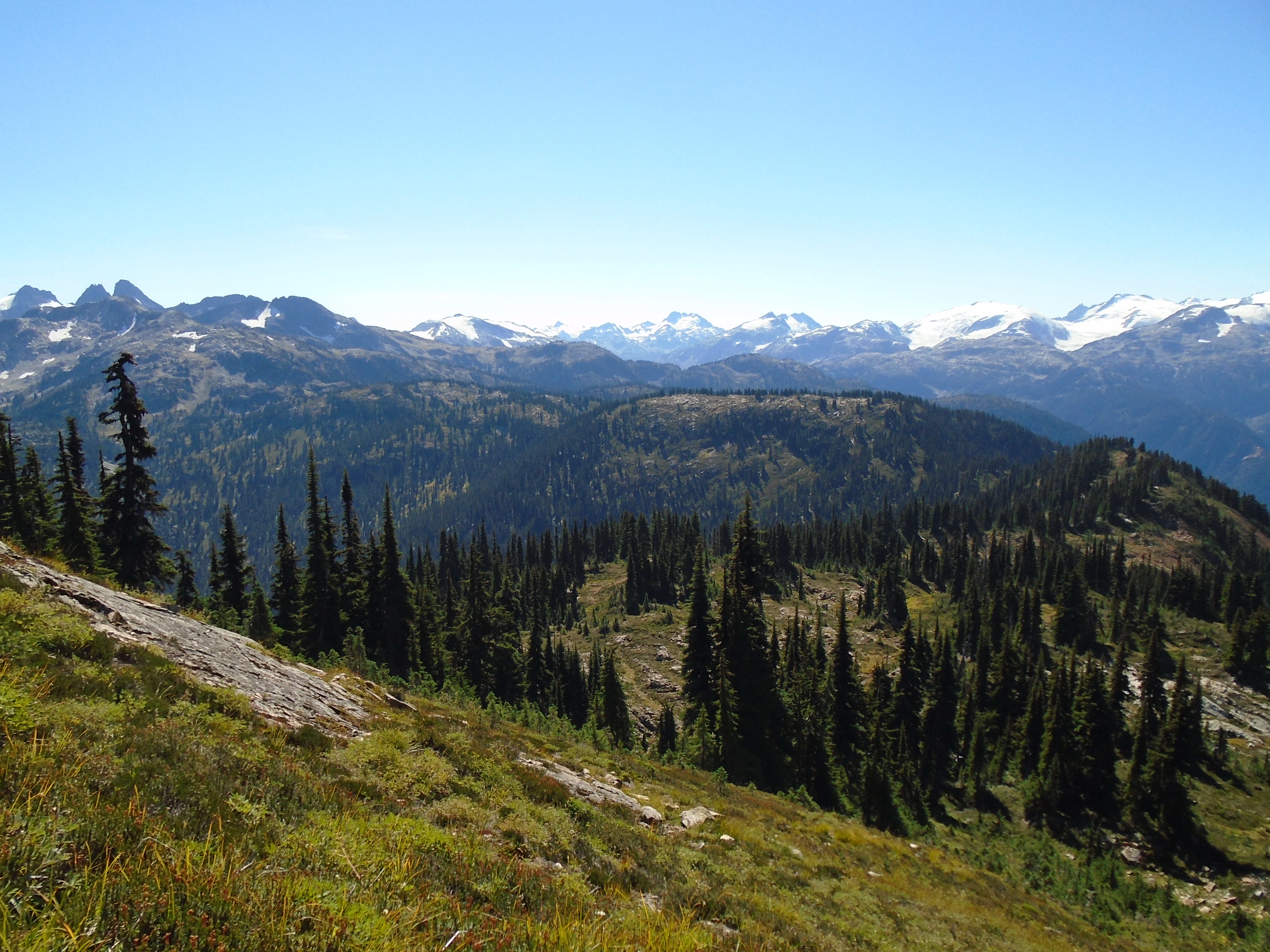 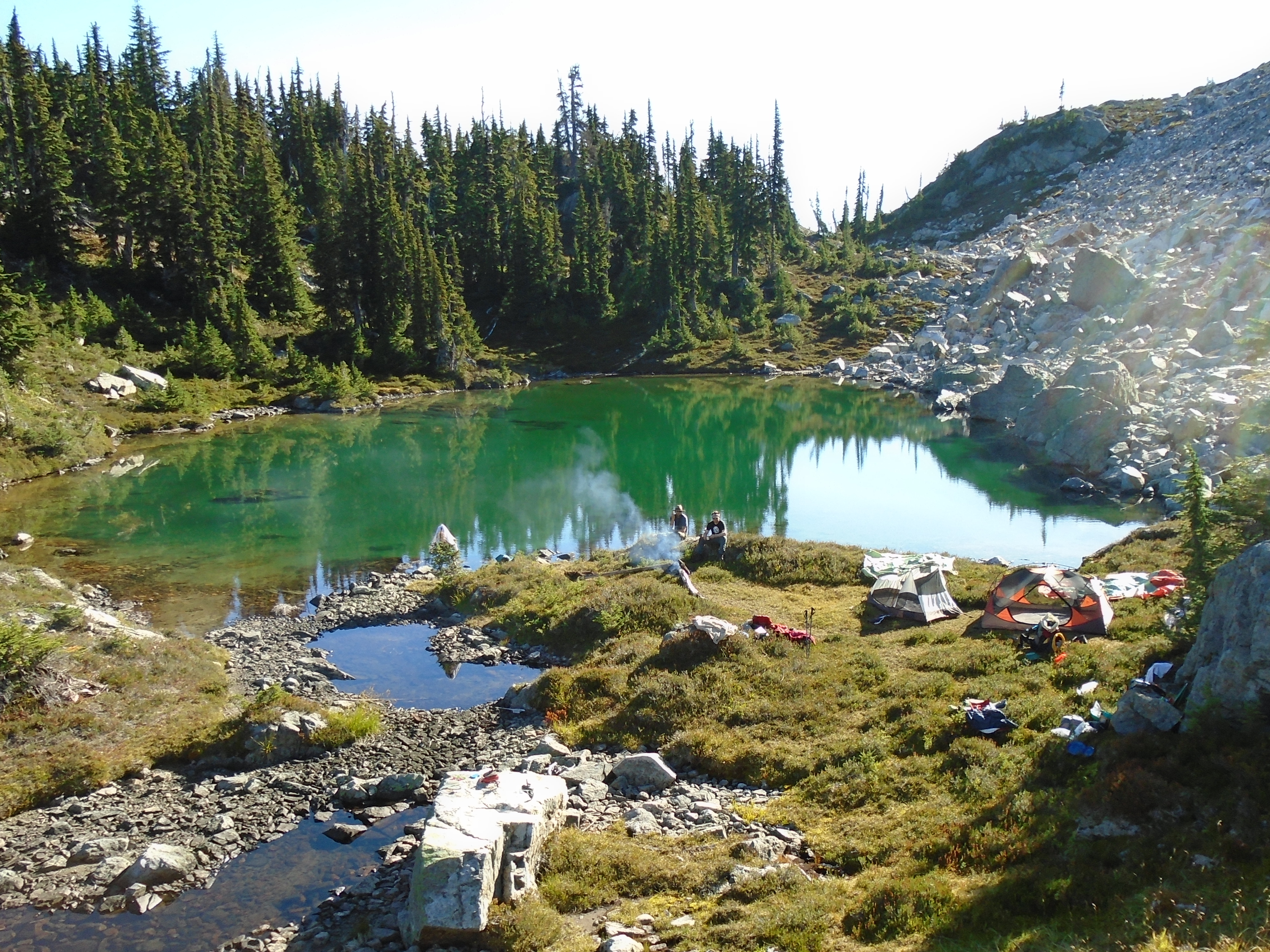 It took us two days to reach Terrarosa Lake.  We took a pretty sketchy route to an unnamed lake above Terrarosa.  We had to do some rock climbing to get up there which is not easy with backpacks loaded with gear.  On the 2014 trip we took a much better route.  The terrain up there is extremely rugged, you are either climbing a talus field, an insanely steep slope or descending on ice most of the time.  Coming into Terrarosa Lake was an amazing sight, perhaps the greatest view I have ever been rewarded with.  It kind of reminds me of a job I was on once near Atlin, BC.  When the company sent me out there my boss told me it was going to be “scenic” and my co-workers all started snickering.  I later found out what they meant.  The camp had no showers, no floors in the canvas tents and no toilet, it was beautiful though. 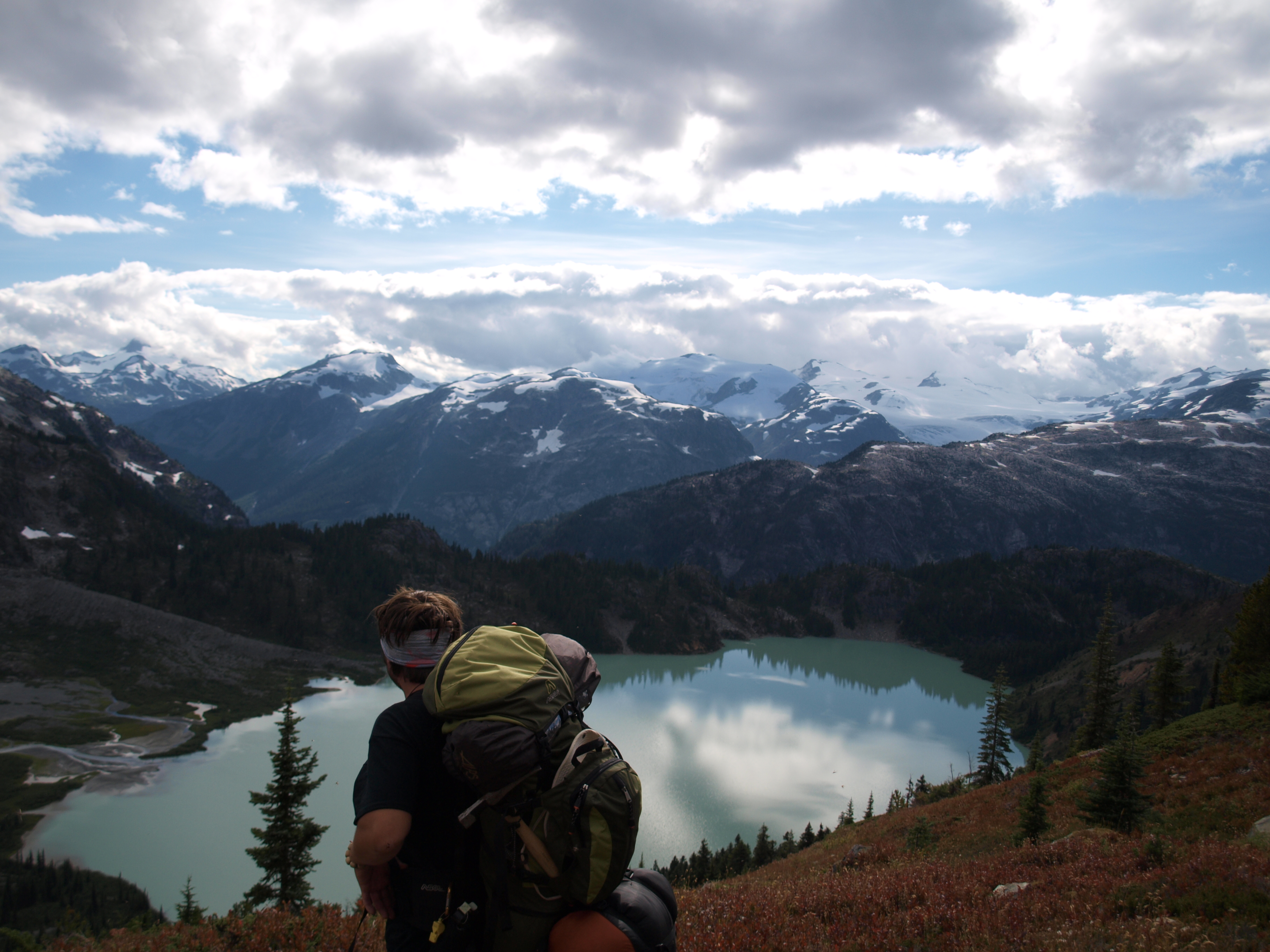 Before we reached our main camp site at Terrarosa we had to cross the run off from the glacier.  There was no way through without crossing a maze of alder bushes and several knee deep streams of ice cold glacial melt.  I always hated alders but after the first trip they will forever be on top of my list of plants that I hate.  It was quite a relief to reach the camp.  We spent three days checking out the area around the lake and tried to make our way into the valley to the West.  Unfortunately we were not able to make it into the valley on that trip.  We did find some great samples of mineralized rock but not the placer that we had hoped for.  After exploring as much of the area as we could we departed on the two day hike back to the logging road.  Once we reached my SUV though we were unpleasantly surprised to find my battery dead.  After several failed attempts to bump start it we had to make the 20km hike out to get a boost.  It was pretty heartbreaking after 7 days of hiking in some of the roughest terrain there is. 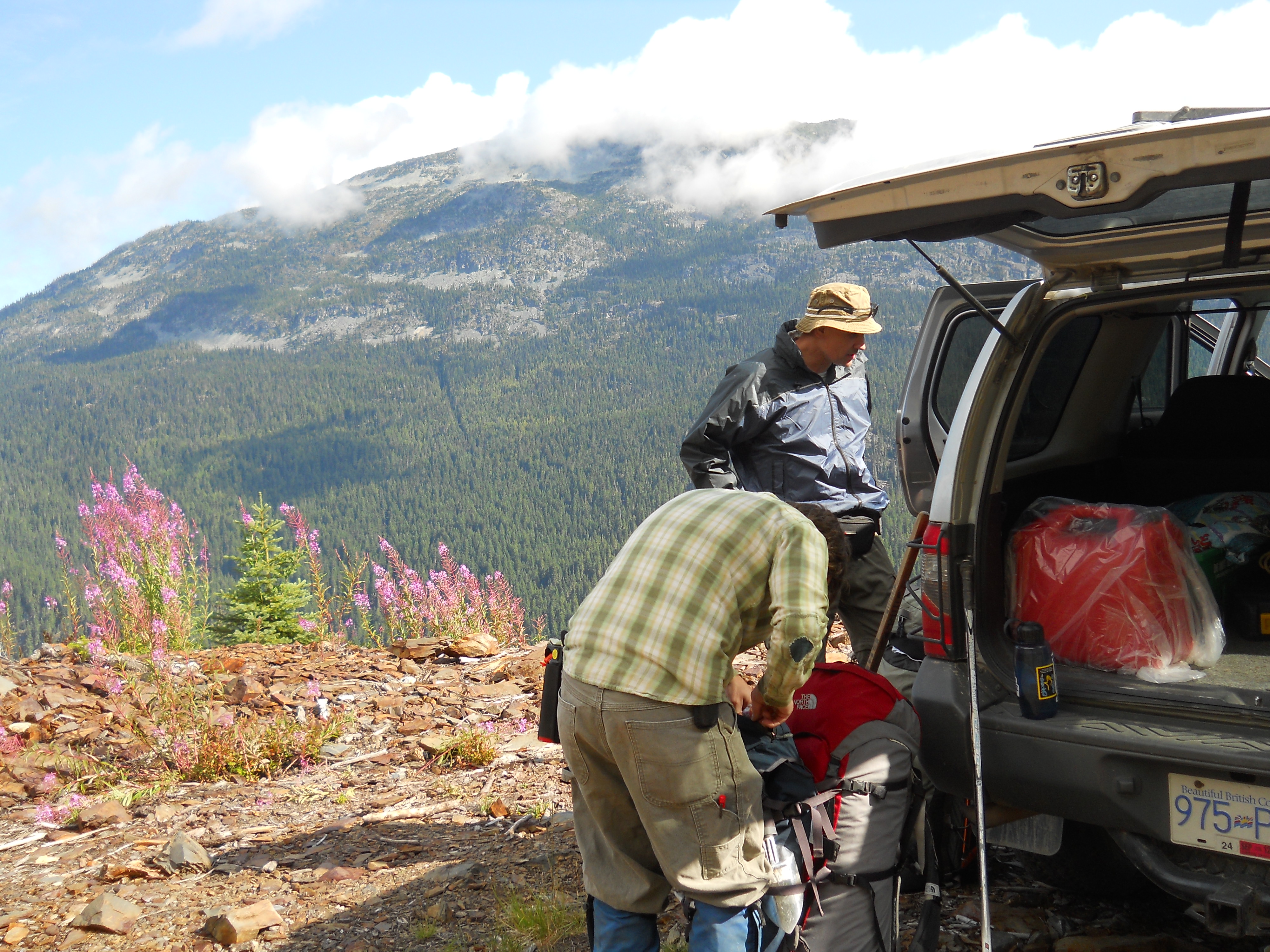 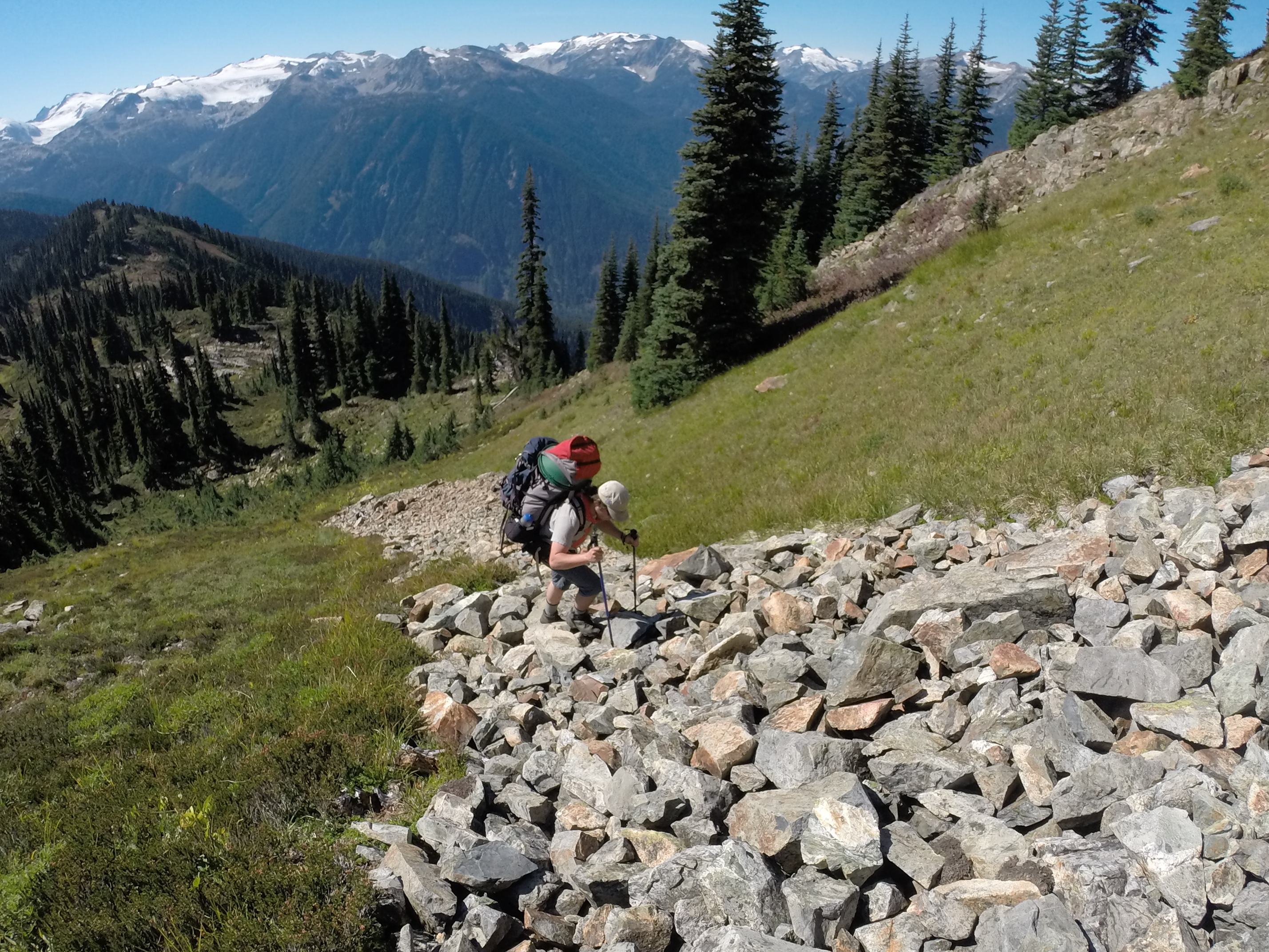 On the return trip in 2014 our primary target was the valley to the West of Terrarosa Lake.  On the way up we spent a night at the Sloquet hot springs and had our last real food and beer before the 9 day trek ahead.  For backpacking we use the freeze dried astronaut food and other lightweight foods. The logging road up to Fire Lake had been fully deactivated since the 2012 trip.  There were deep drainages to cross and pushed the limit of my SUV, I bent my hitch somewhere along the way.  This time we were more confident in our hiking route as we had learned by trial and error on the previous trip.  Instead of camping up above at the lake we moved our camp right down in the valley.  It took three days to get in and another three days to get out of the valley and added some even uglier slopes.  It also rained for five of the nine days that we were out there which only added to the difficulty.  We did have a better planned route though.

The valley had some amazing rock with lots of quartz veins and signs of gold.  There are several creeks down there that have potential for placer gold as well.  We saw several waterfalls too.  It was tough going and to reach one of our targets we had to wrestle our way through the worst alder bushes I hope I ever see.  They have sideways branches the size of a human thigh filled in with smaller bushes.  It was like some kind of cruel jungle gym on a steep mountain slope.  We managed to reach all of our targeted spots this time with a few mishaps along the way.  At one point my brother had to jump naked into a freezing creek because he dropped his rock hammer. 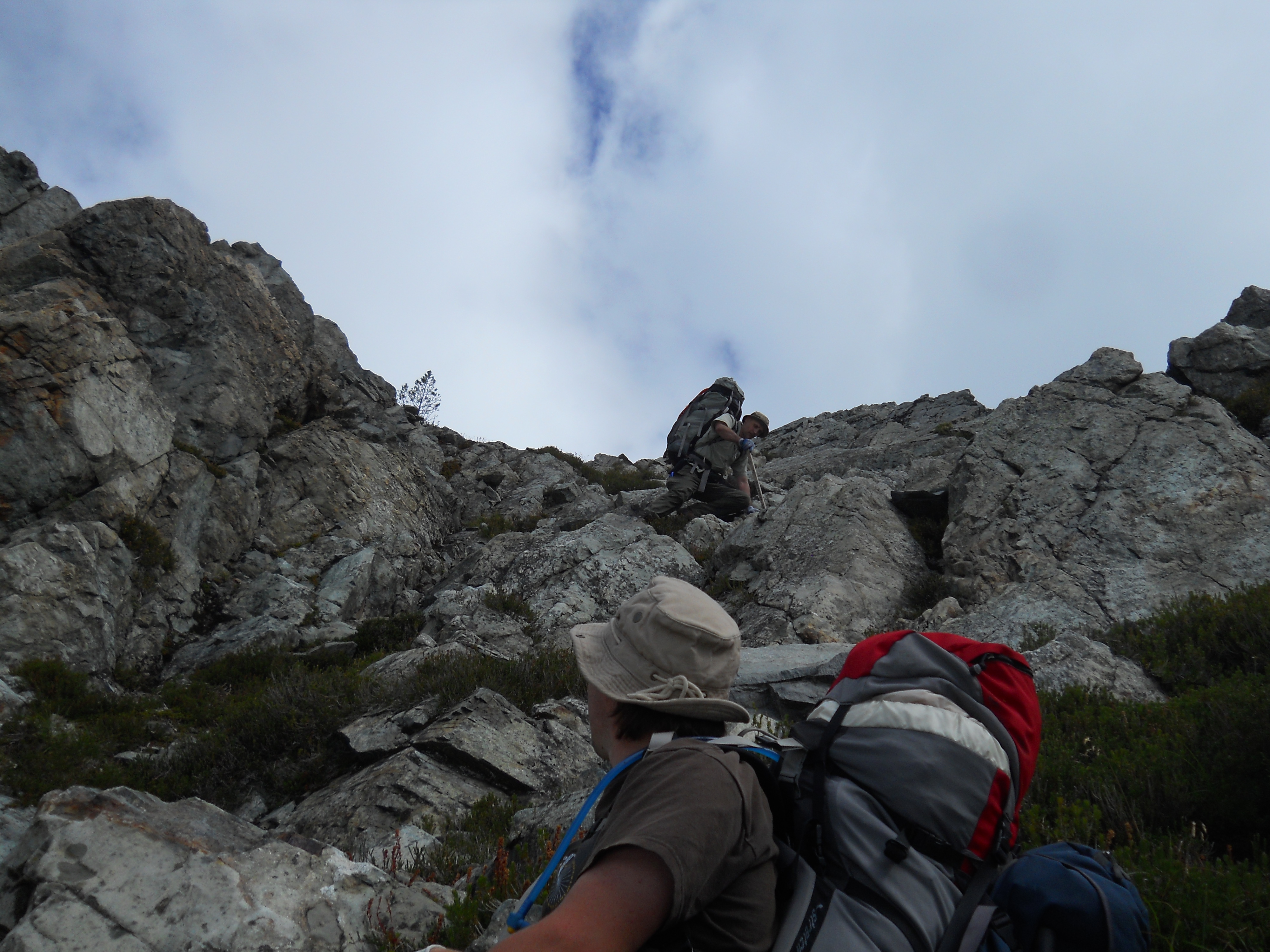 The climb out of the valley was very treaterous.  It was almost too steep to walk up, we spent a lot of the time crawling and holding on to vegetation like a climbing rope.  There were a couple of close calls but we made it up OK.  We hiked back around the lake and set up a camp for the night.  It took two more days to reach the SUV again.  This time I disconnected the battery to prevent a repeat of the previous situation.  After a couple of well deserved warm beers and some clean clothes we hit the road.  We took the long way around and stopped in Whistler for one of the most rewarding hamburgers of our lives. 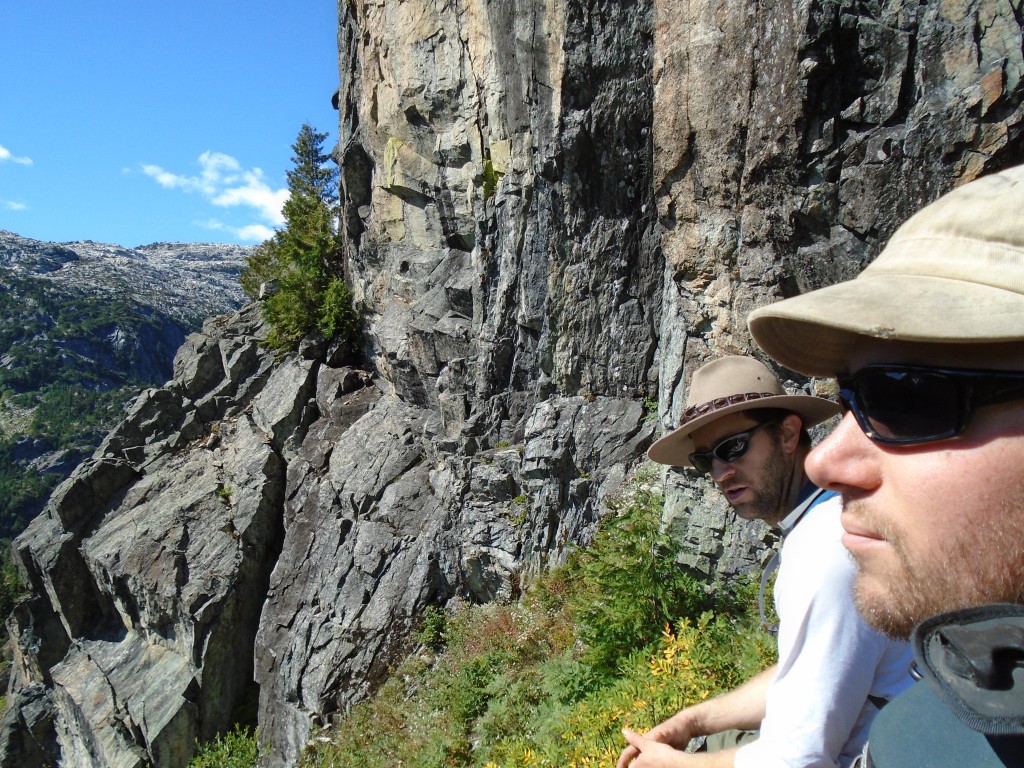 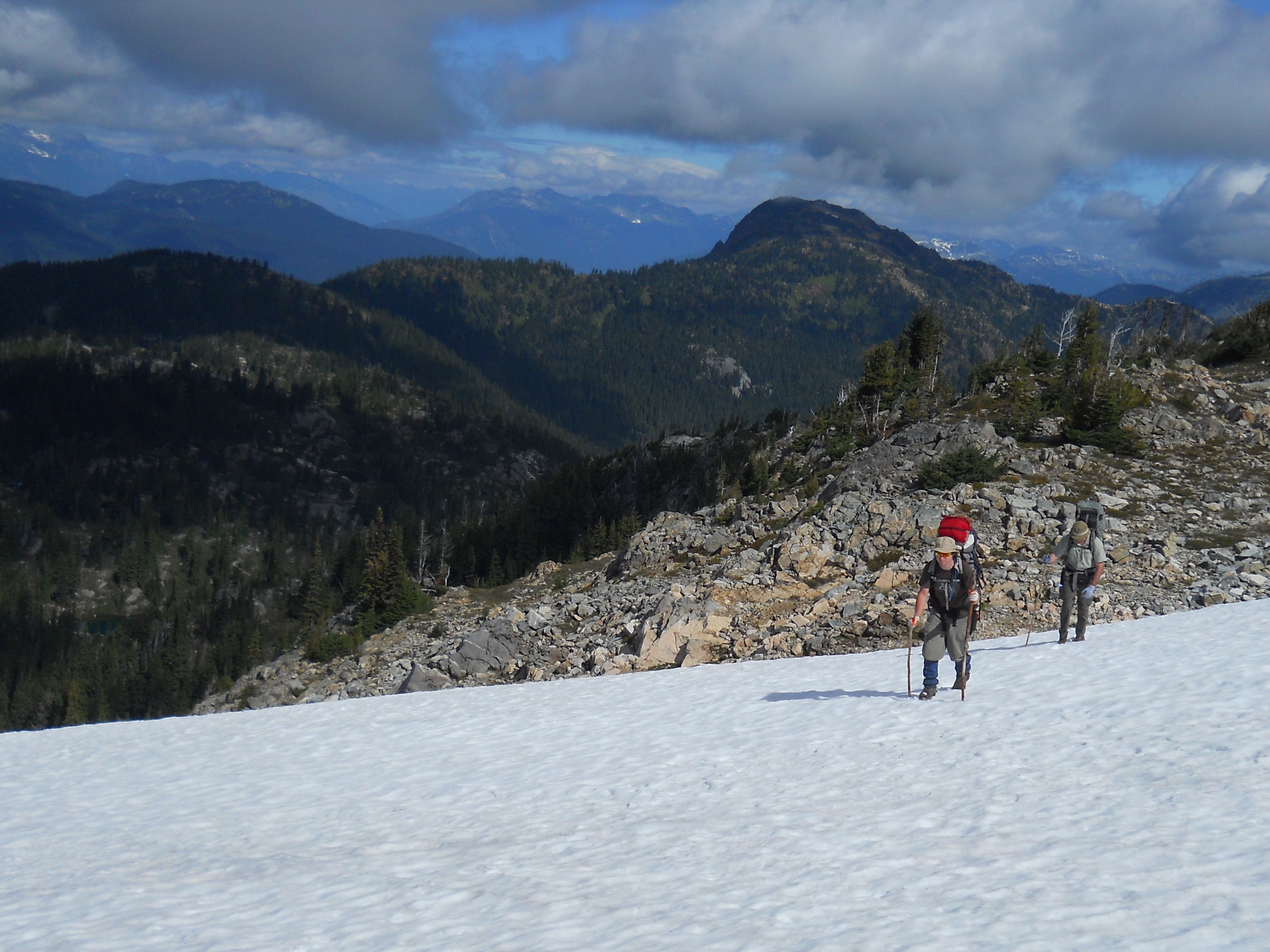 The trips we took up into Slumach country were some of the most memorable of my life.  The scenery and sense of accomplishment from mastering that kind of terrain will forever be etched in my memory.  Both expeditions had numerous challenges but we made it out alive and well.  I have everything mapped out in GIS but because of the time, sweat and money investment I won’t post it publicly. Slumach’s curse did not take us yet.  As for the gold?  I’m not going to give away too much info on what we found up there.  I have every reason to believe that the legends are true.