Last weekend I went out to check out some claims on Granite Creek.  This creek experienced a significant gold rush in 1885.  The ghost town of Granite city is at the mouth of the creek, what’s left of it anyway.  Our GPS track is below. 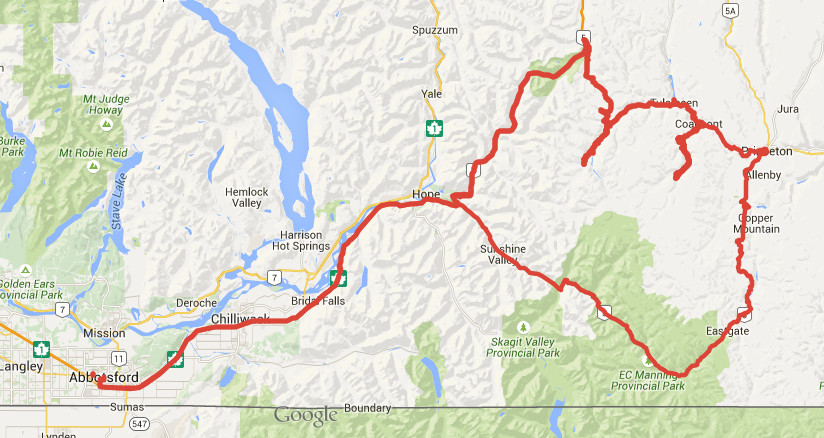 We took Highway 3 from Hope to Princeton then took the backroads through the Tulameen.  The first stop was the Granite City ghost town, then up Granite Creek to my claims.  Later we drove up through the town of Tulameen up the Forestry roads to see Tulameen falls.  We camped nearby and exited the dirt roads at Britton Creek on the Coquihalla highway.  We checked out the Othello tunnels on the way home.  The whole trip was approximately 470km.  My 8 year old son accompanied me on this trip because he had a geography report for school and decided to do it on the history of this area.

We passed through the hamlet of Coalmont on the way to Granite Creek.  There’s not much there except for a couple of streets with some old buildings and these funny signs. 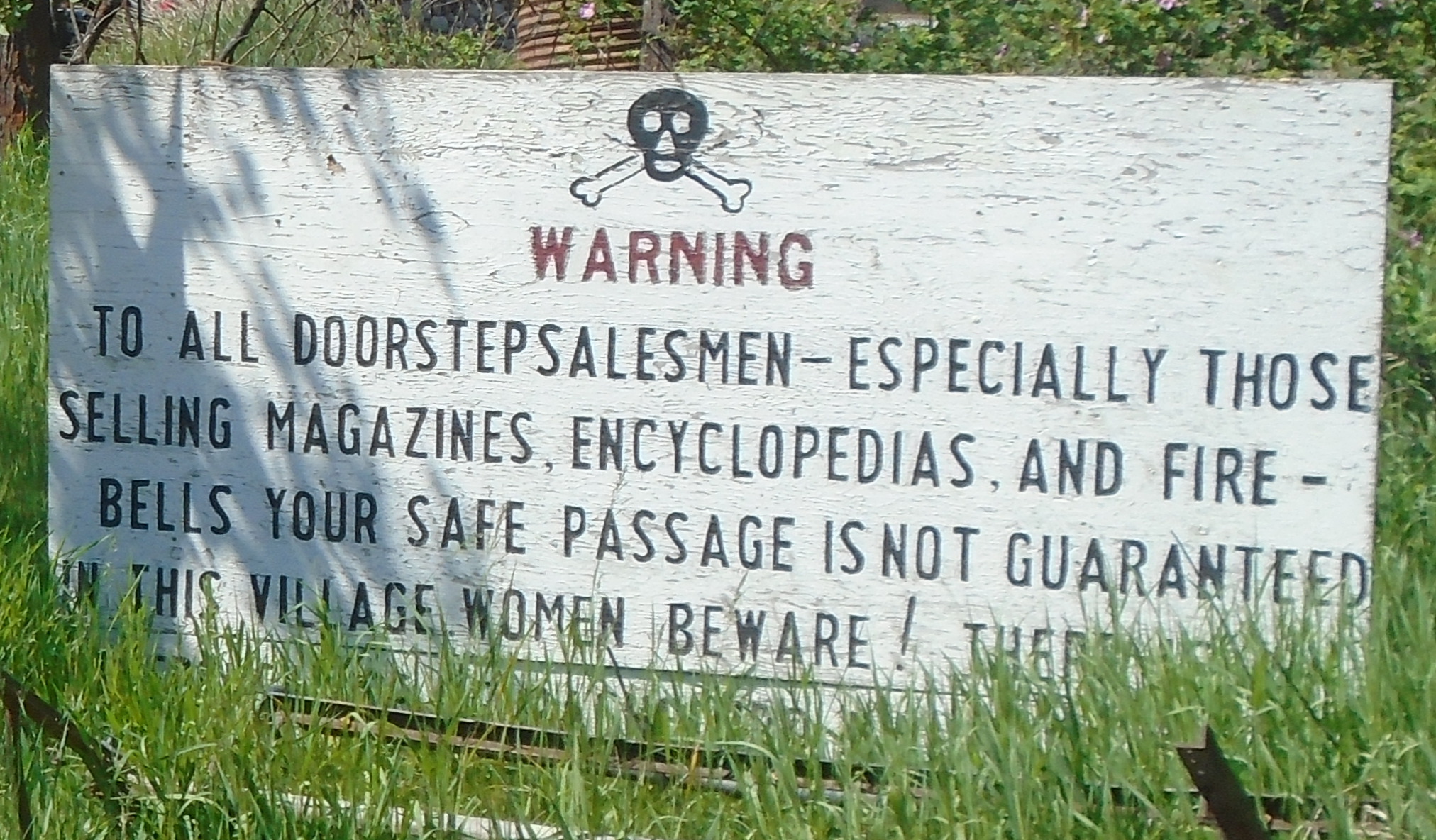 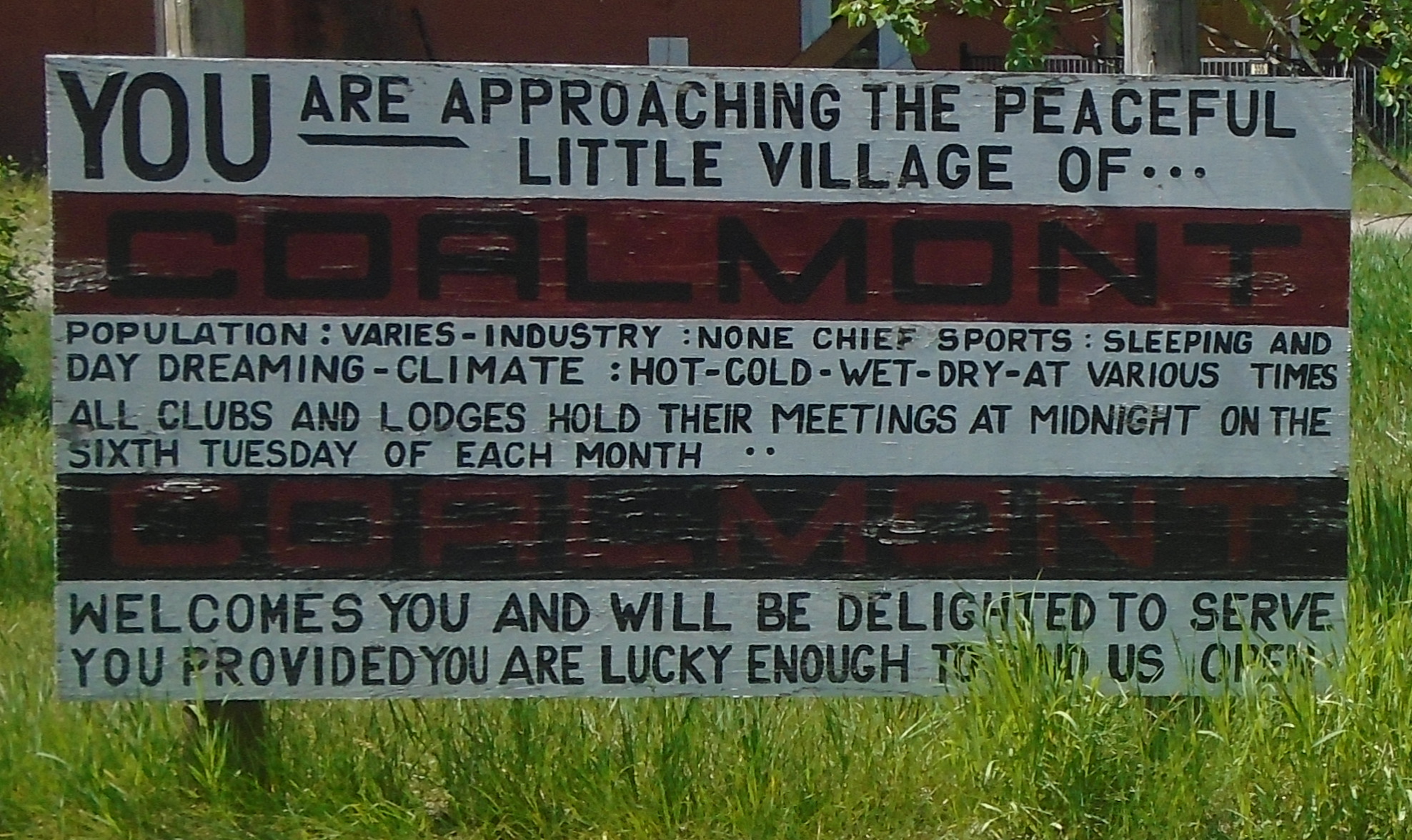 I had been waiting a long time to check out the Granite City ghost town.  It was quite a large city at the height of the gold rush.  There were over two hundred buildings, 13 of which were saloons.  The bars in Granite ran flat out 24/7.  This was a real frontier town with all the ingredients for a great western movie, gunslingers, gamblers and prospectors.  With a population of over two thousand in 1885 Granite City was the third largest city in BC, even larger than Vancouver at the time. 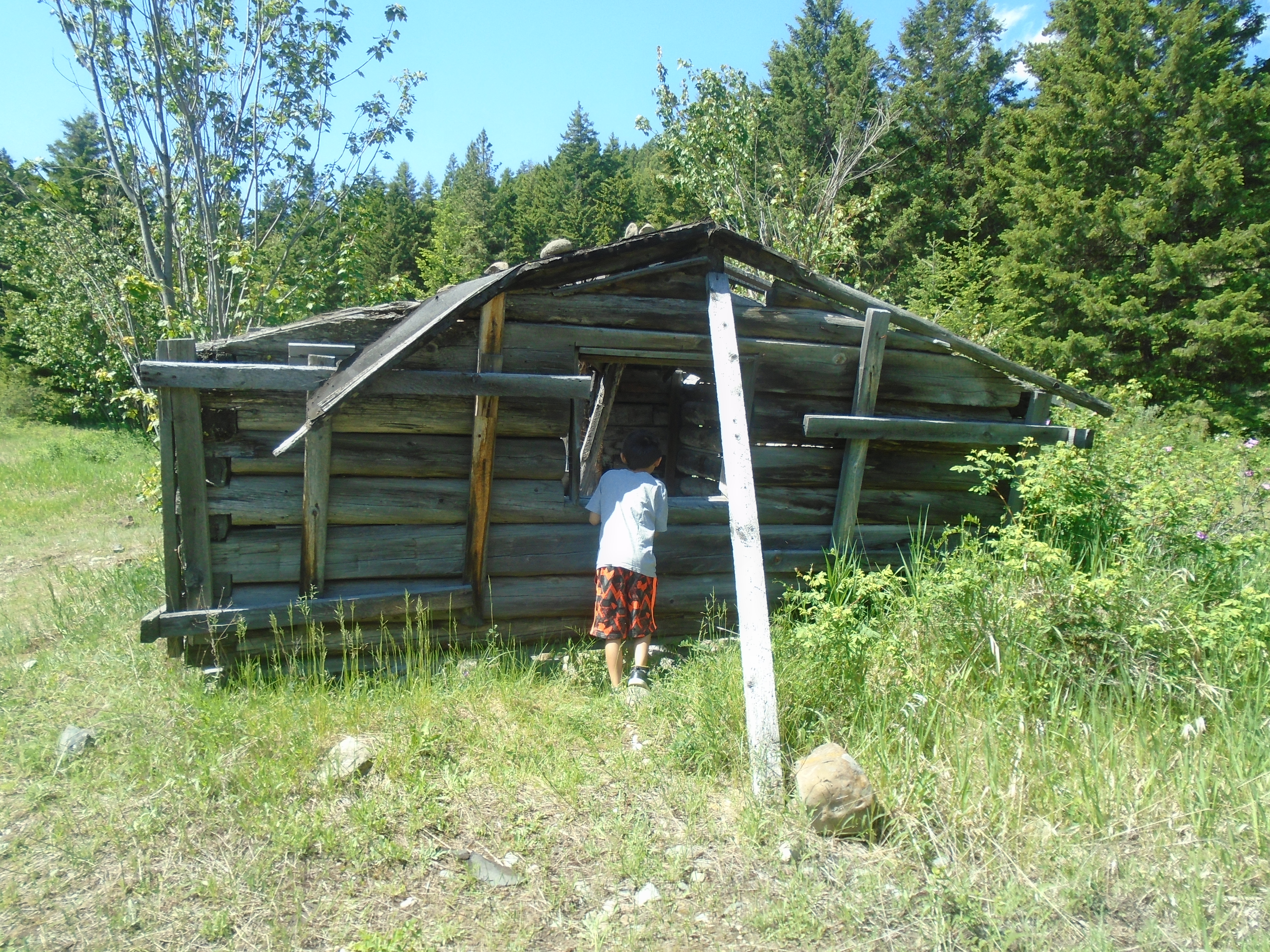 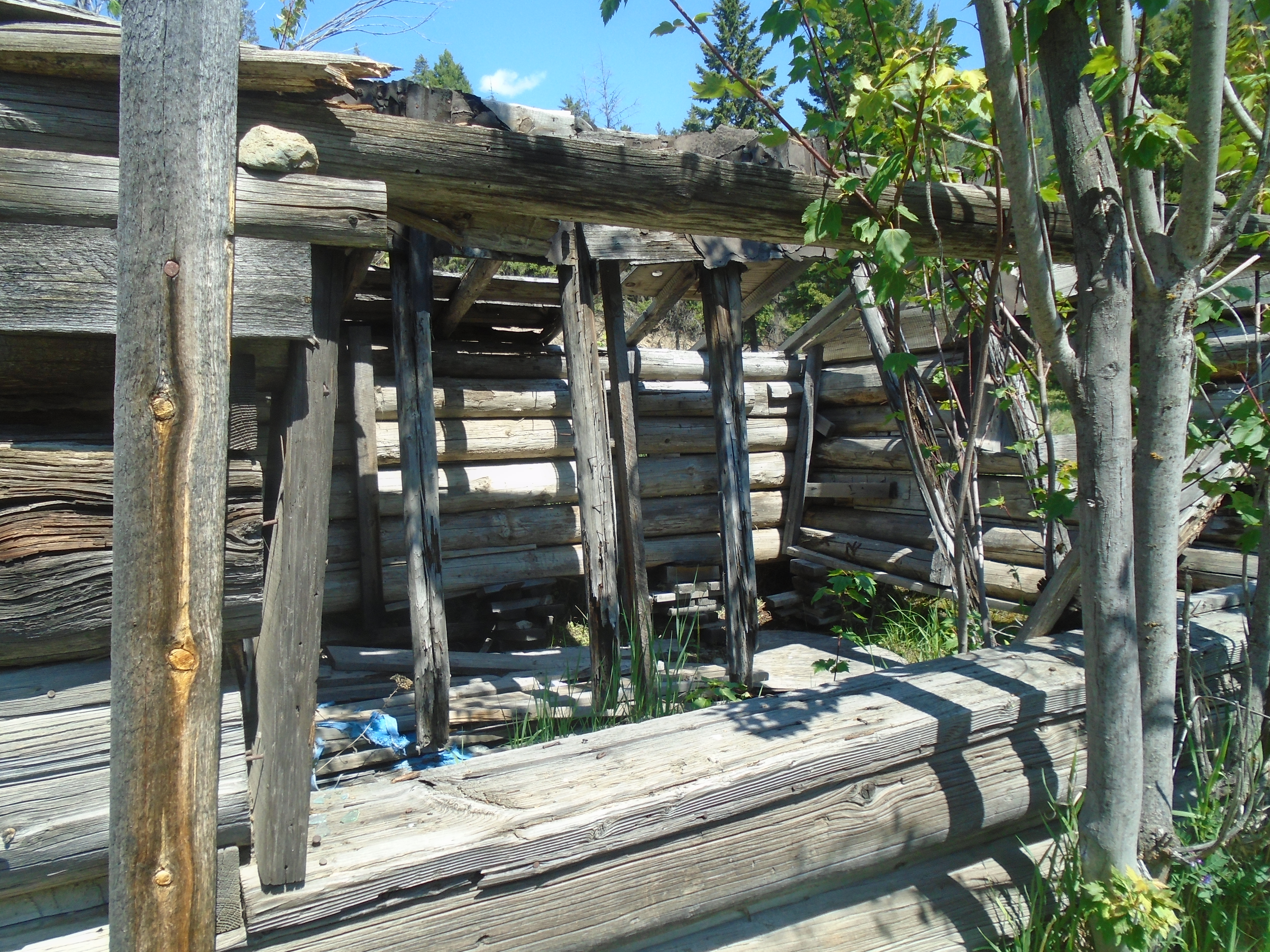 There are many stories about Granite City, such as the lost platinum cache.  It is interesting that the tributaries of the Tulameen, including Granite Creek, are one of two places in the world where both platinum and gold are found in the creeks.  The other is the Amur river in Russia.  At the beginning of the gold rush in this area the miners were collecting platinum in their gold pans and rockers but they didn’t know what it was.  Platinum is very dense and will sit in the bottom a gold pan the same way gold does.  I have found platinum in my pan before and it took me a couple seconds to realize what it was.  Most miners kept their platinum but many threw it away with their black sands.

The lost cache legend states that a prospector named Johannson collected platinum from the miners and build up several tin cans full.  He apparently buried his cache within sight of the front door of his cabin with the intention of returning to collect it.  He was never heard from again.  At any rate there is not much left of this gold rush town today.  There are a handful of cabins in various states of decay, a monument and a graveyard. 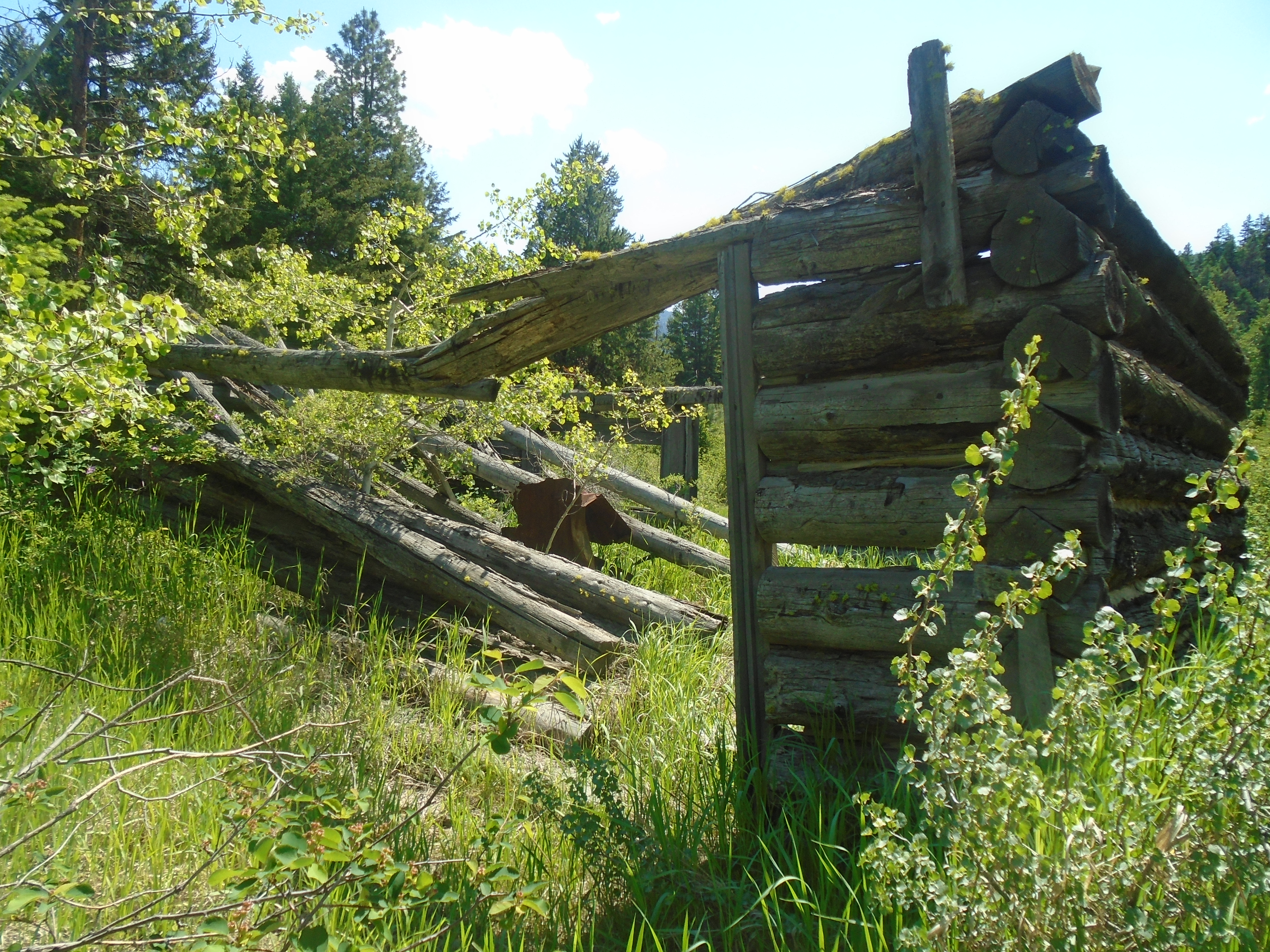 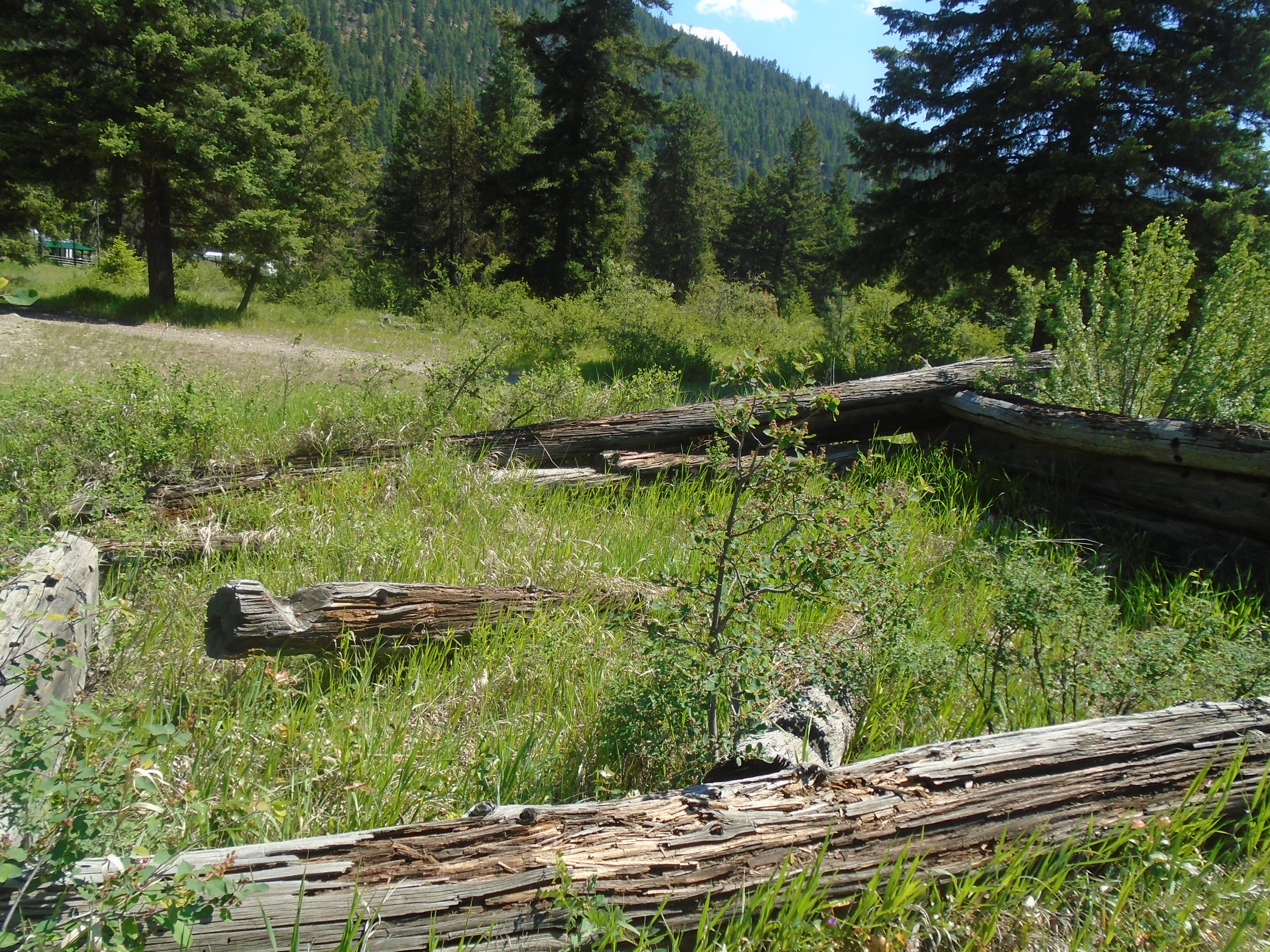 My claims are about 17 kilometers up the road from the old townsite.  We took the Arastra creek forest road up to the confluence of Arastra and Granite creeks.  I met a local prospector while we were up there and he told me Arastra creek got its name because the chinese miners built a large water wheel crusher called and Arastra.  The claims that I have are not directly on the water so we had to bring our samples to the creek to pan.  It was very labor intensive. 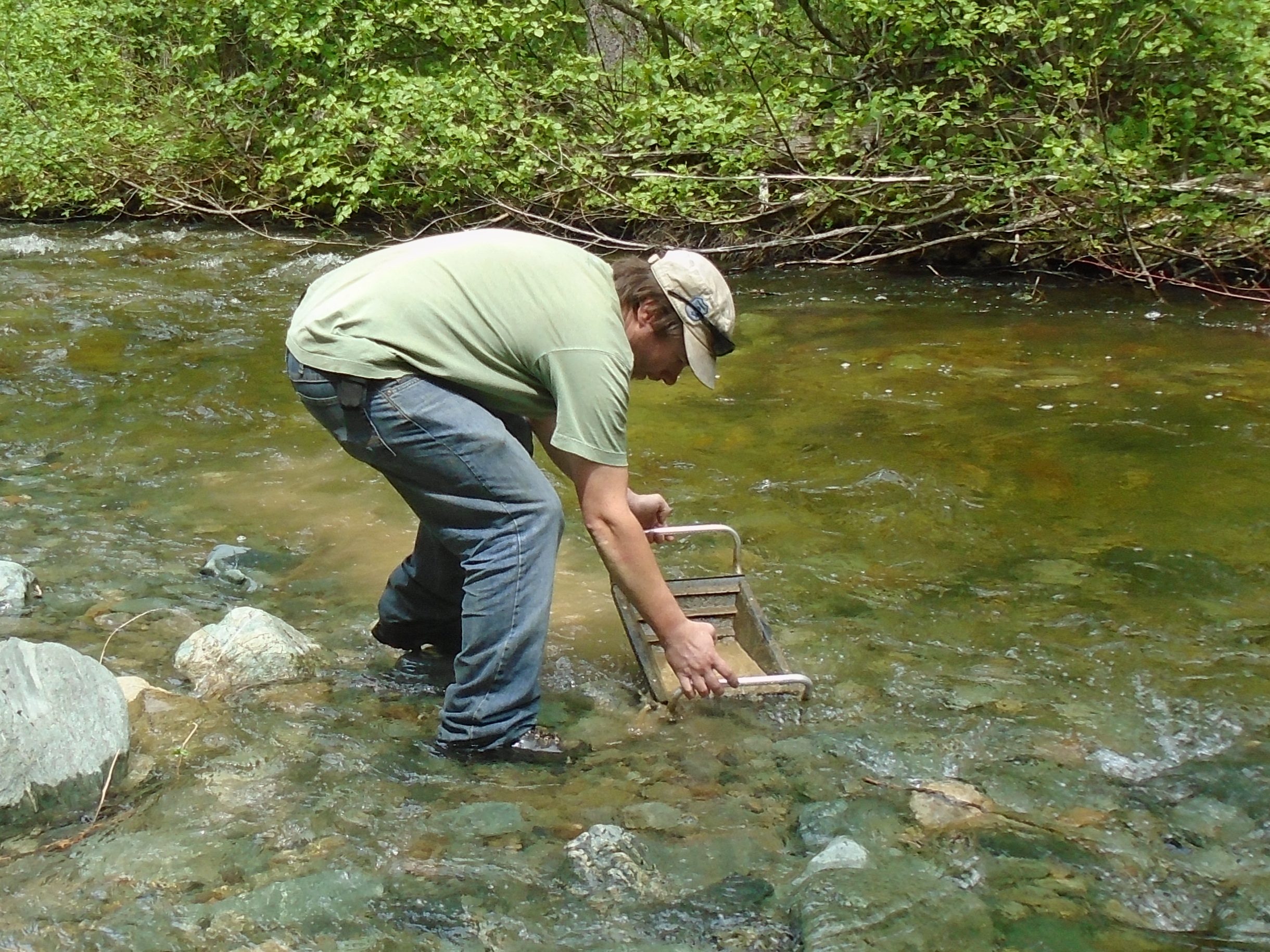 One claim was right off the road so we were able to use my truck to drive the buckets of gravel to the creek.  The second claim required that we hike along Granite creek on a very old trail.  While hiking along the 2km section to my claim one can’t help but imagine what it would have been like out here in the 1880s.  There was evidence of old camps and such all along the way.  We even found an old miner’s cabin that had long since been deserted. 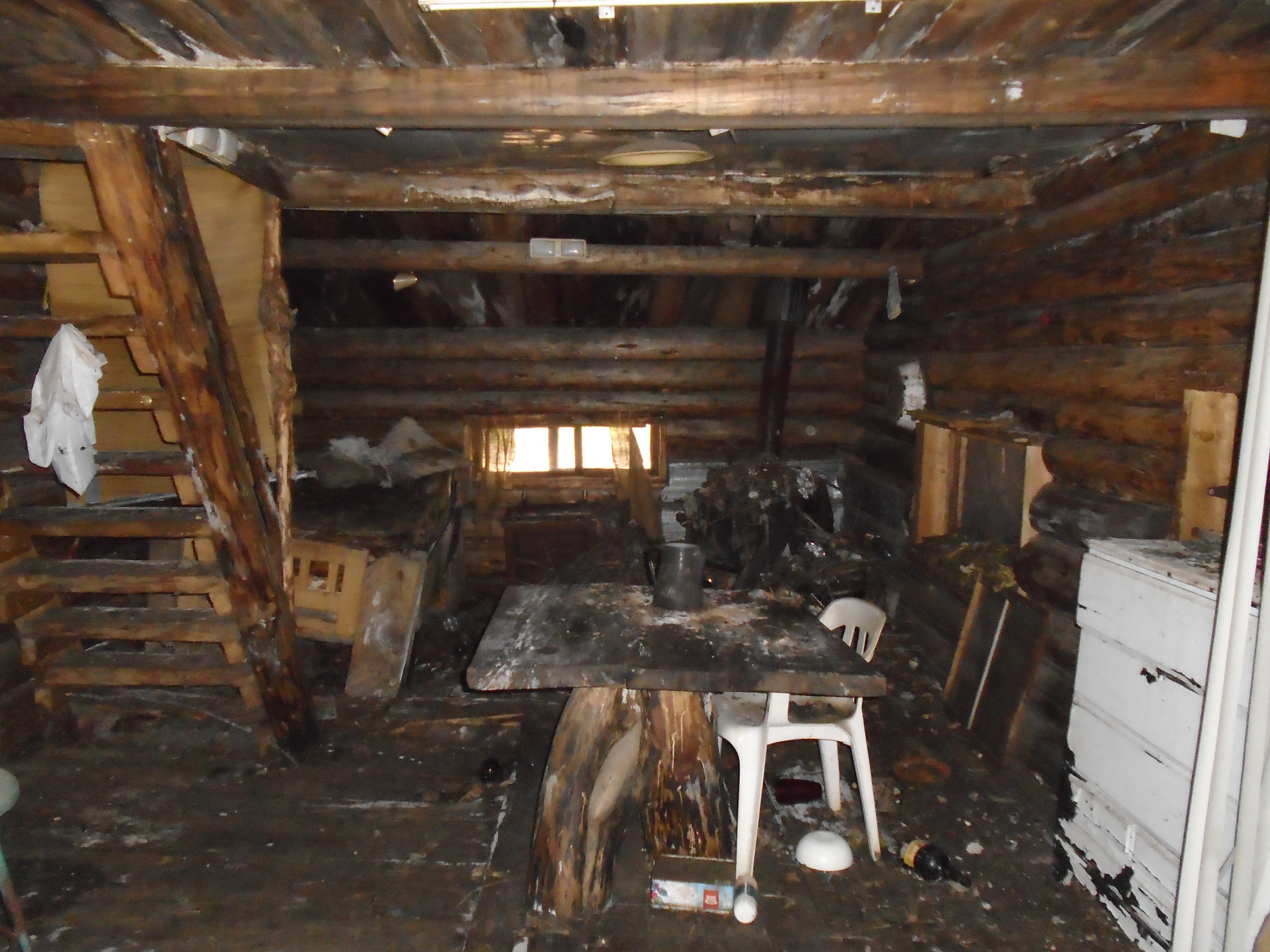 We managed to get a few samples of 20L each.  I concentrated the samples on site with my pyramid pan so I only had to hike out with 1L bags.  We did a few test pans around the area and saw some color.  No platinum though.  After finishing the work on my claims we packed up our camp and headed up the Tulameen to check out an awesome waterfall called Tulameen falls. 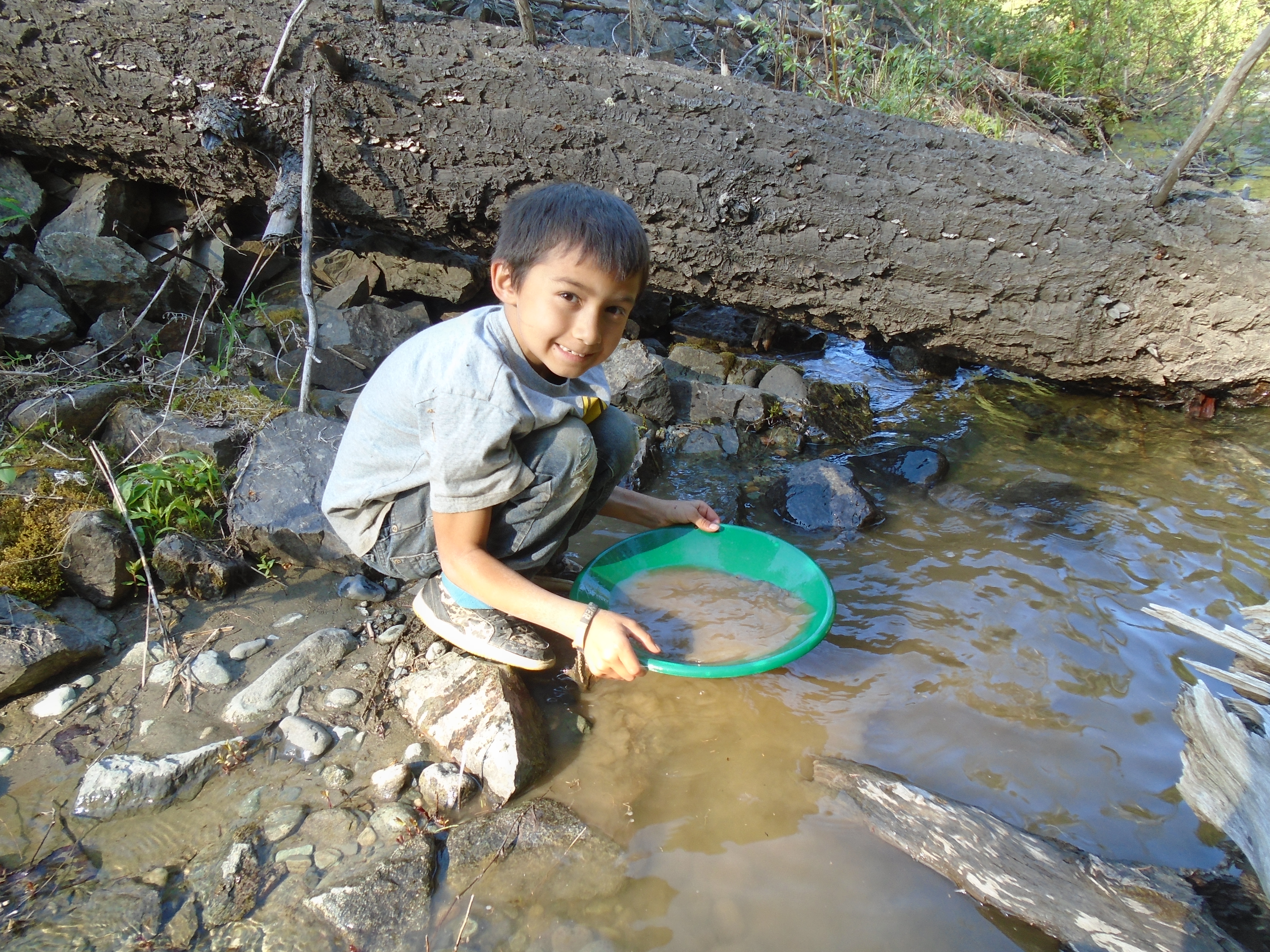 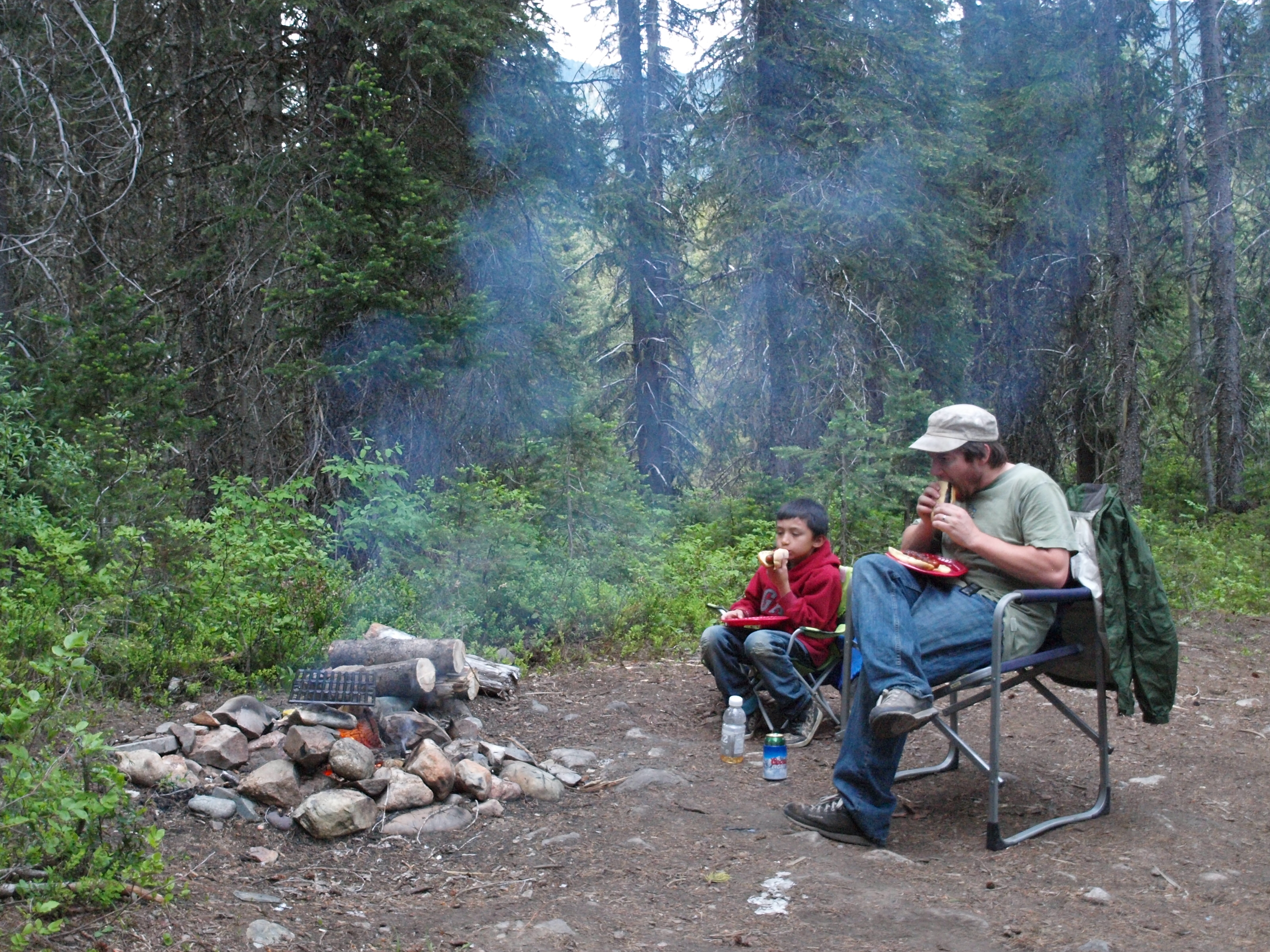 The waterfall is located approximately 30km up the river from the townsite of Tulameen.  The Similkameen tourist pamphlet that we picked up in Princeton said the waterfall is accessed by a 1km moderate hiking trail with two river crossings.  That doesn’t sound too bad.  When we got to the trail head it looked like nothing was there it seems that a forestry operation has moved the road an piled banks of large rocks over the old recreation site.  We found the trail marked by spray paint on a tree.  The first part was not too bad, then we crossed the river in our bare feet to keep our boots dry.  There were signs to only cross in low water but it seemed low enough.  The water was up to my mid thigh but a lot higher on my son.  After that the trail was pretty bad with some sections of no trail at all.  It looked like it was a well maintained trail once but must have been hit with a flood or something.   The waterfall is amazing, it has over 1400 feet of drop and a lot of water pouring over it. 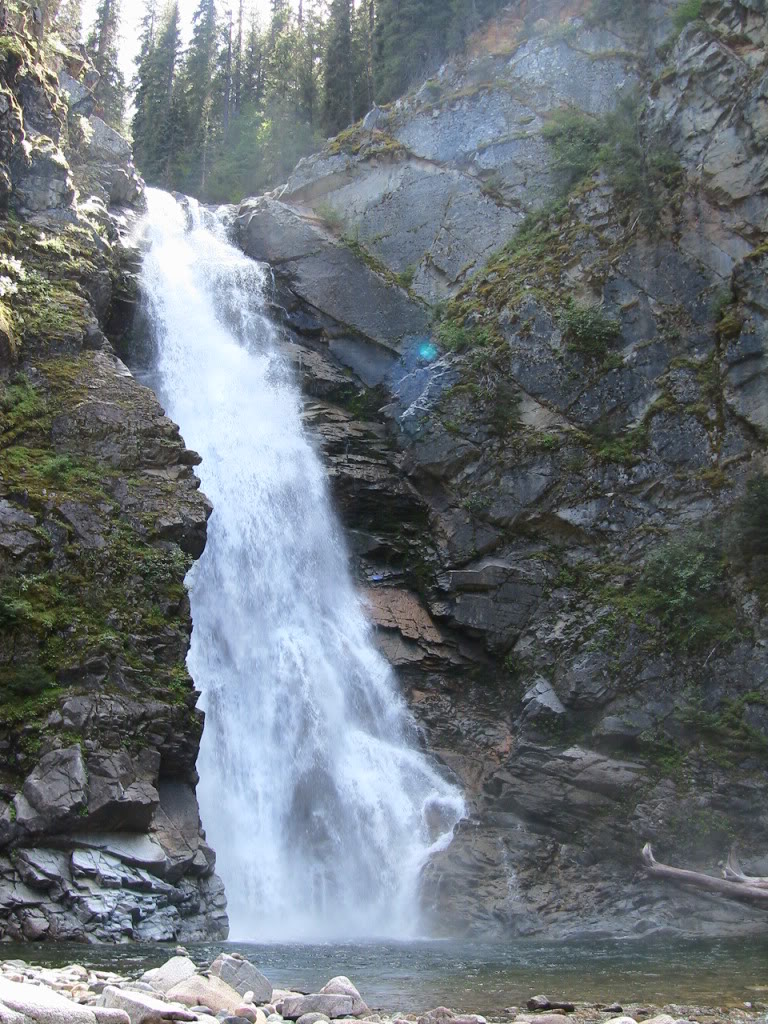 We found a really nice free camp site a few kilometers up the road from the trailhead.  It is called Sutter Creek Recreation Site.  After staying the night we headed back to civilization with one more stop on the way.  We checked out the Othello tunnels just North of Hope.  These tunnels were part of the old Kettle Valley railroad.  The KVR was a steam railroad the serviced the region from Hope to present day Kelowna.  There are five tunnels close together and several bridges to make it possible to access this section of the Coquihalla canyon.  Apparently the lead engineer was a Shakepeare nut and named several of the stations after characters from Shakepeare plays.  There were Othello, Romeo, Juliet, Lear, Jessica, Shylock and Portia. 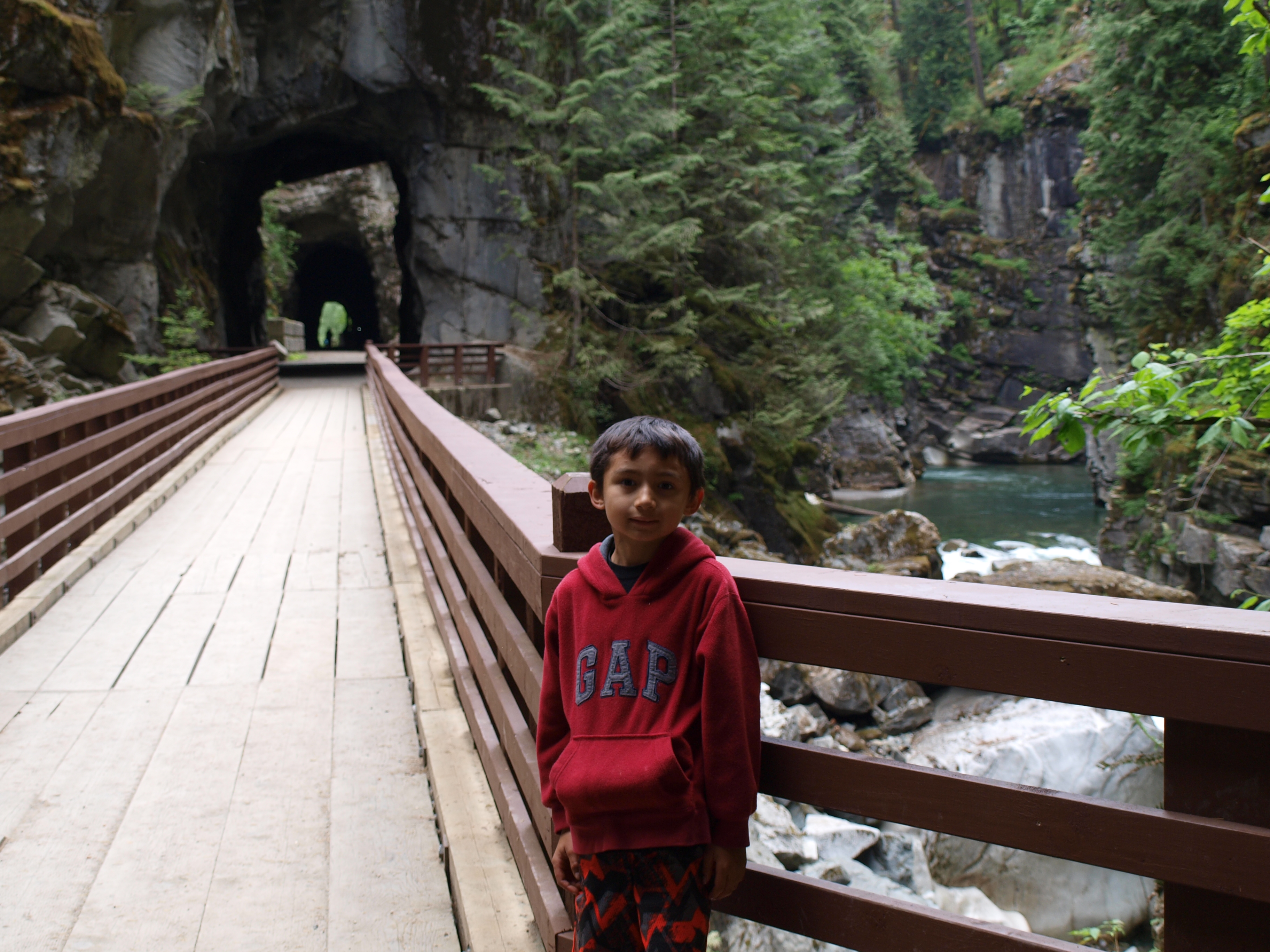 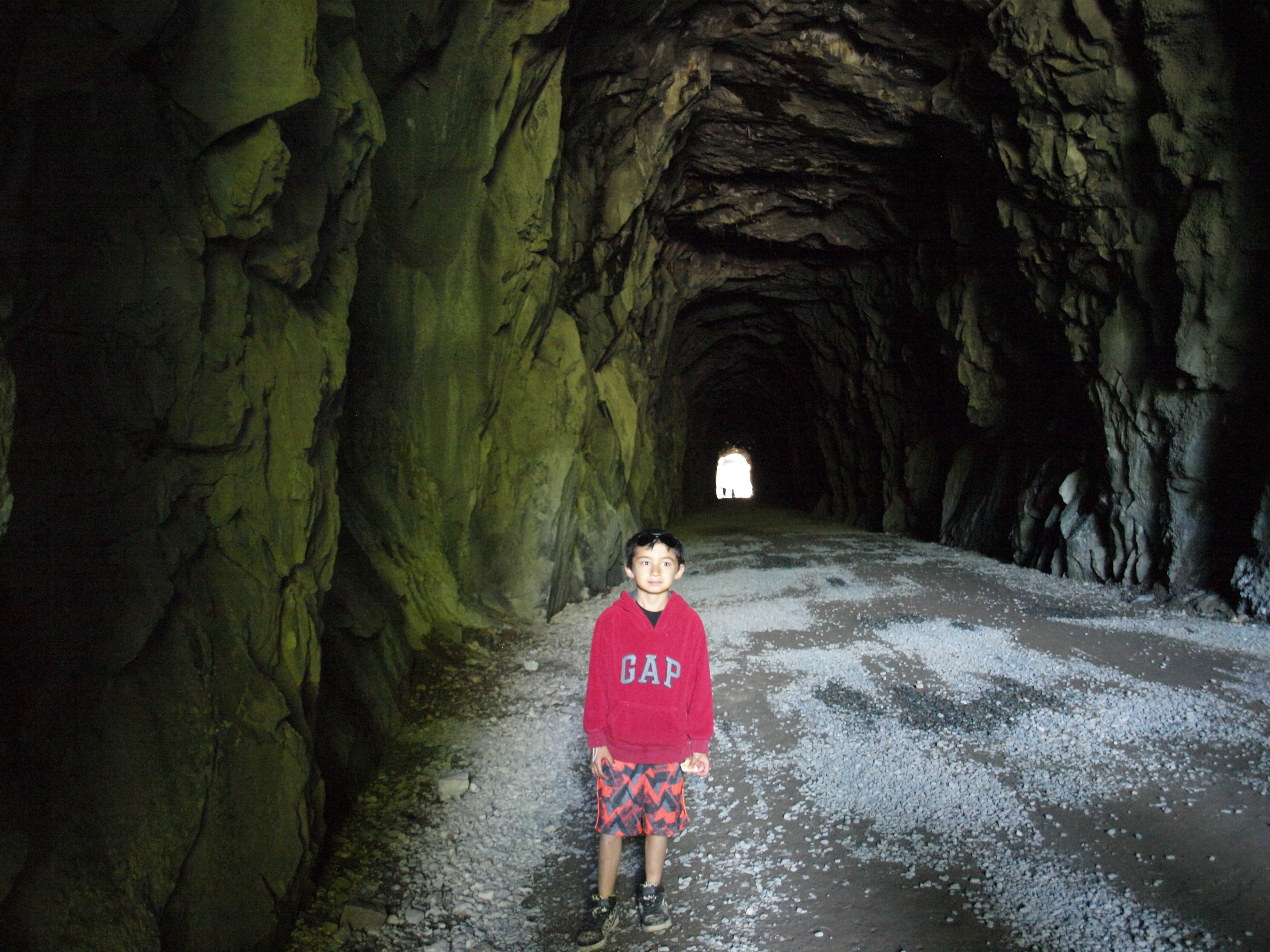 Overall it was a great trip.  We did some initial sampling on two claims and saw some cool parts of Southern BC.  I have other claims in the area and will be back soon.  There’s something about the Tulameen that gives an eerie feeling when you are out there.  It could be the remoteness or the history of the area.  Maybe its the platinum, whatever it is I like it and can’t wait to explore the region in the future.