In the spring 2016 I was hired to help on a large scale placer exploration program in the Yukon. The property is located in a part of the Yukon where very little placer activity has taken place. We had a small team of three guys and a lot of equipment. 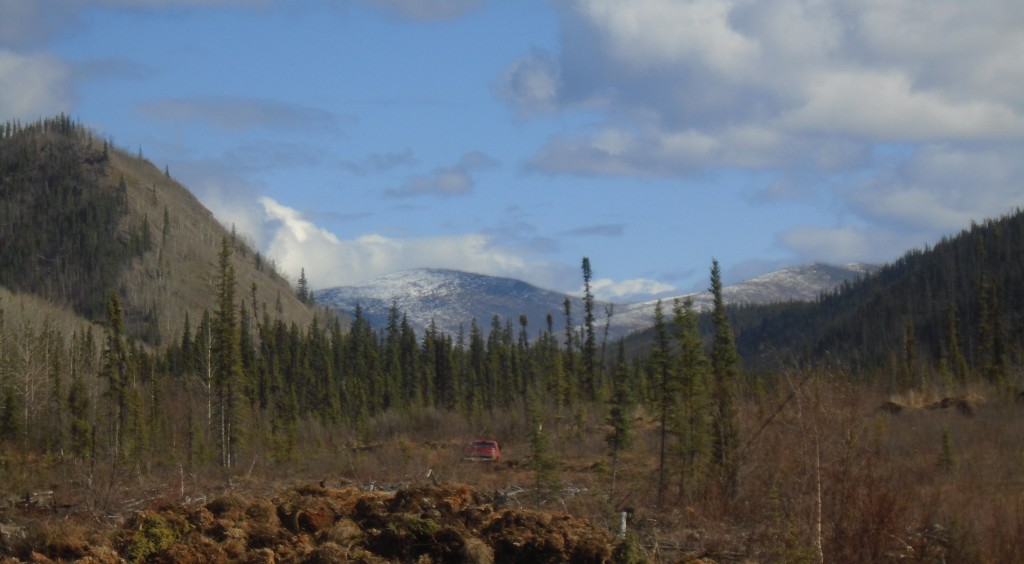 The Yukon, like BC and Alaska, was explored and settled by prospectors in the late 1800s.  The Klondike gold rush of 1896-1899 was the largest and most storied gold rush in history.  It is estimated that over 100,000 gold seekers migrated to the Arctic territory from places like San Fransico and Seattle.  The Yukon’s economy is still driven by mining and the local culture is completely saturated with gold rush era influences.  A great example is Yukon Gold, the flagship beer of the Yukon Brewing Company, has part the the famous poem “The Cremation of Sam Mcgee” on the label. 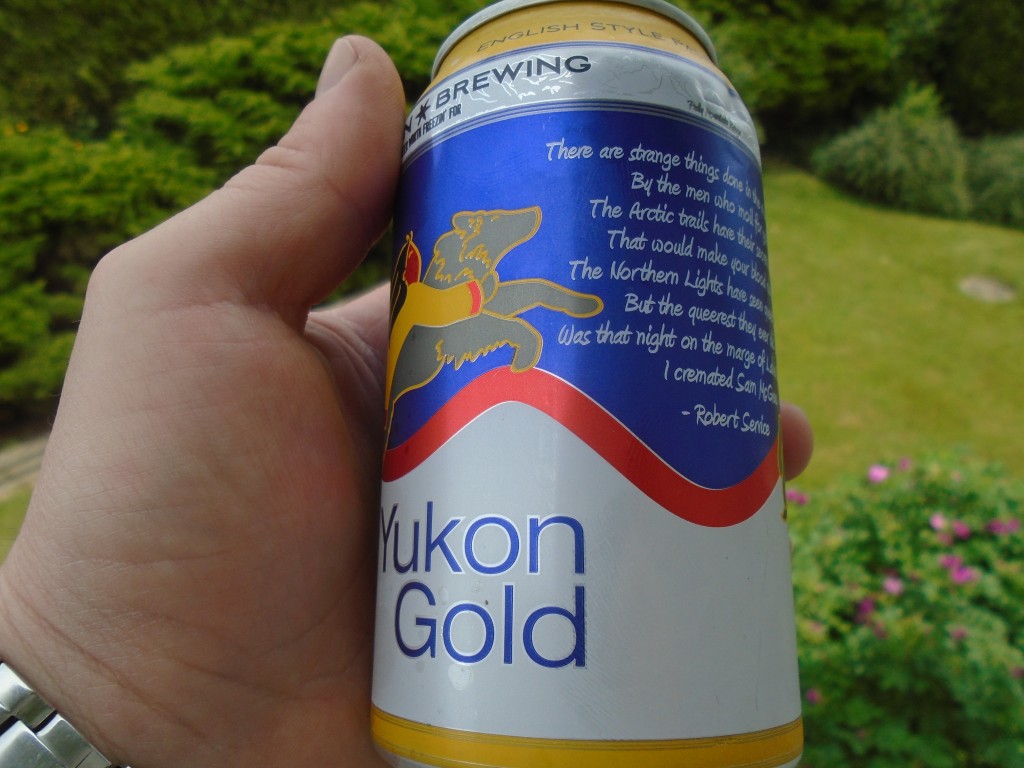 The Robert Service poem is part of Canadian heritage and is part of the school curriculum across the country.  After several trips prospecting in the Yukon it takes on different meaning than a quirky poem that you have to read out loud in grade three.

There are strange things done in the midnight sun
By the men who moil for gold;
The Arctic trails have their secret tales
That would make your blood run cold;
The Northern Lights have seen queer sights,
But the queerest they ever did see
Was that night on the marge of Lake Lebarge
I cremated Sam McGee.

On a Monday night in early April at 9PM I received a phone call. “Your flight leaves Vancouver in the morning for Whitehorse. We’ll fill you in on the way.” Typical for this kind of job. I had been expecting the call for a few weeks but it still caught me a little off guard.

On arrival to Whitehorse I had been advised that one of our crew would meet me there. I had never met this guy before but I knew he was an old placer miner. The Whitehorse airport is small and we were the only flight. There were several people waiting for passengers so I had to guess. I noticed a guy wearing rubber boots and looked like a placer miner to me. I introduced myself and luckily he was the right guy.

We spent a couple hours rounding up additional gear before catching the charter to the camp. I was crammed in a Cessna 206 with the pilot and a bunch of gear. We had all the 5 gallon pails we could buy at the Whitehorse Home Hardware, drill bits, my gear, a 45 gallon drum of diesel, and a bunch of other stuff.

Soon after leaving Whitehorse we flew over Lake Lebarge which is the location where Sam Magee was famously cremated.

The pilot warned me that the runway was a little rough. We took a couple passes and lined up to land. It was rough all right, made of gravel and ice, we bounced so hard that we almost took off again. My two crew members were waiting to greet me at the plane. They were excited to meet me, especially since I brought a 24 pack of Kokanee. The beer didn’t last the night. 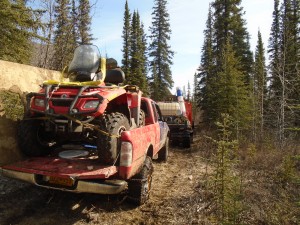 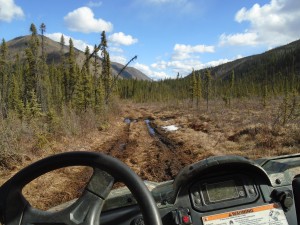 The two guys that I was working with had already been there for several weeks. It’s a rustic camp and there was no water available for showers or anything. I thought my team mates smelled pretty bad when I arrived but after a few days we all smelled the same. A few weeks later temperatures were high enough to rig up a pump system and a shower. This is not the first rustic camp that I’ve been to where we have satellite internet and no showers.  These are interesting times to be an explorer. 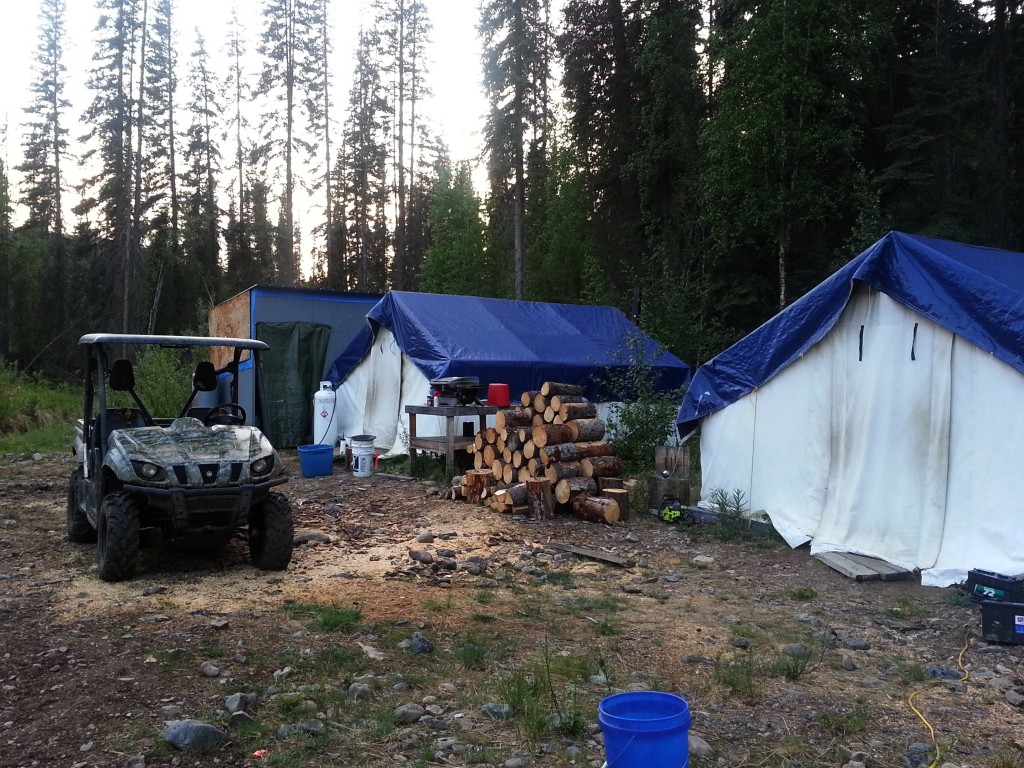 The camp consists of three canvas tents, a seacan and an outhouse.  The tents have “hippy killer” stoves that burn wood.  They work well most of the time but you have to chop wood every time you want heat.  Wood floors had been constructed which is certainly a luxury over dirt floors.  Our kitchen is in the same tent as the office.  There’s a propane stove/oven and plenty of food.  We used paper plates so we wouldn’t have to wash them, they worked great for starting the stoves when we were done with them. 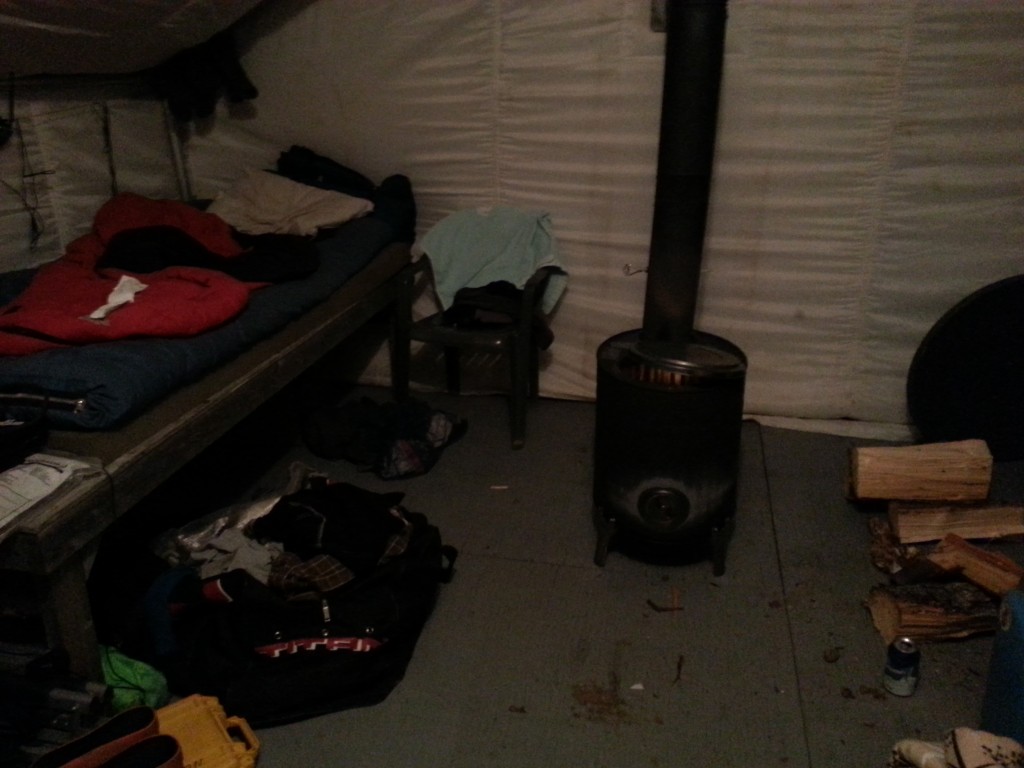 The main goal of this program was to carry out a sampling over the property.  The drilling and sampling will allow us to find and evaluate economic placer deposits. Our primary tool was a Nodwell mounted drill with a 12″ auger. Some areas were sampled by excavator where the ground was not suitable to drill. Material was collected with the drill and excavator and processed on site with a small wash plant. In addition to gold values we developed an understanding of bedrock depth, characteristics and the distribution of placer gold.

Most of the gear was brought in on the winter trail. The trail is about 100km from the closest dirt road and requires the ground to be frozen and snow covered. Our two Nodwells, Toyota track truck, quads, fuel and everything was brought in over the trail. With a light load it can be travelled by snowmobile in about 4 hours each way. With the heavy equipment it takes 3-4 days. There are impromptu camps along the way but nothing with heat and very little shelter. The guys were prepared of course.

Nodwells are pretty cool machines.  They were invented in the 1950s to service the oilfields of Northern Alberta and the Arctic.  These beastly machines have super wide tracks to spread their weight on soft terrain.  They have a unique drive system that uses rubber tires on the track.  Operating one is similar to driving a tank.  You pull levers to brake the track on either side.  We had two of them, a big Nodwell for the drill and a smaller one for a support vehicle.  The Nodwells have a lot of character, check out the yellow plywood interior and gun rack.  The small one is named “Picasso”.  The photos will expand when clicked. 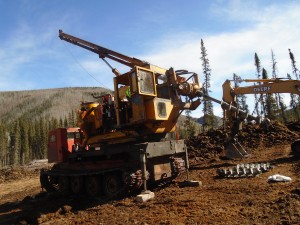 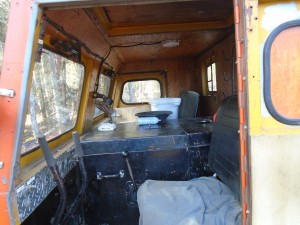 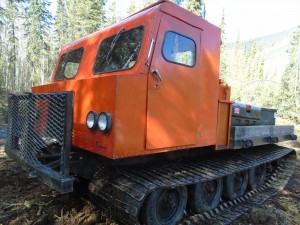 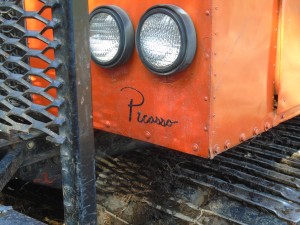 We located and mapped several trenches that were used for ground sluicing dating back to the 1898 Yukon gold rush. The old timers diverted the creek to flow through hand cut trenches. The water was then controlled via a series of gates to strip away overburden. Sort of like hydraulicking. There’s not much left of the old workings today but it gives us an idea of where the pay streaks are.

Sampling is key to any placer operation.  Sloppy or inadequate sampling spells the death of many mining operations.  After all you wouldn’t get married without going on a date first.  We collected samples with a rugged 12″ auger drill.  Each sample had a set depth interval and a measured volume.  With accurate measurements we can extrapolate the sample data to evaluate the deposit over large areas.  For example if we sample 500mg (1/2 gram) from 10 pails of material,  that equates to just over 3 grams per cubic yard.  We did have some just like that, and better.

After collection by the drill our samples were run through a mini wash plant.  We were using a cool machine called “The Prospector” by Goldfield Engineering.  The Prospector uses a water driven pelton wheel to create a vibration.  That’s awesome because all it needs is a 2″ pump to run.  The wheel rotates an eccentric weight similar to the way the a cell phone vibrates but on a larger scale.  Using this machine I processed over 15 cubic yards of samples over 7 weeks. 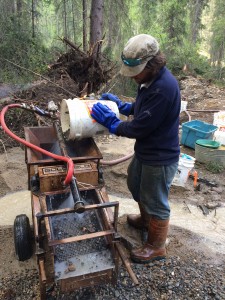 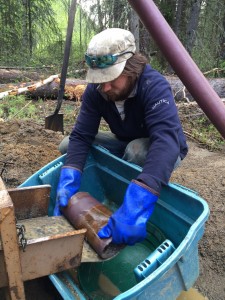 The Prospector really eats through material.  The shaker screen breaks it up almost as fast as you can feed it. It struggles when there is a lot of clay though.  After each sample interval is run a cleanup is necessary.  With this machine it’s a quick procedure.  The concentrates from each sample are panned out with a gold pan.  The gold is then dried out and weighed to be used in grade estimates. 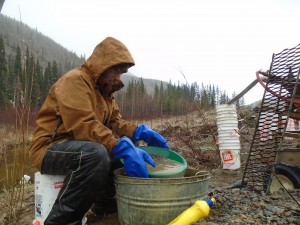 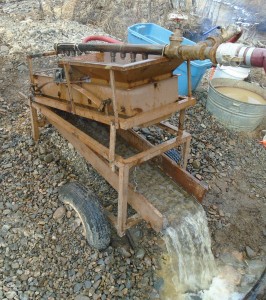 As the summer solstice approaches the days get longer in the Yukon.  In the summer the sun does not set in the Arctic it is after all the land of the midnight sun.  The lack of darkness takes a little getting used to.  In early May we had a couple of Northern lights shows that were pretty good.  At that time there was about 2 hours of darkness where the Northern lights were visible.  A week later it would no longer be dark enough. 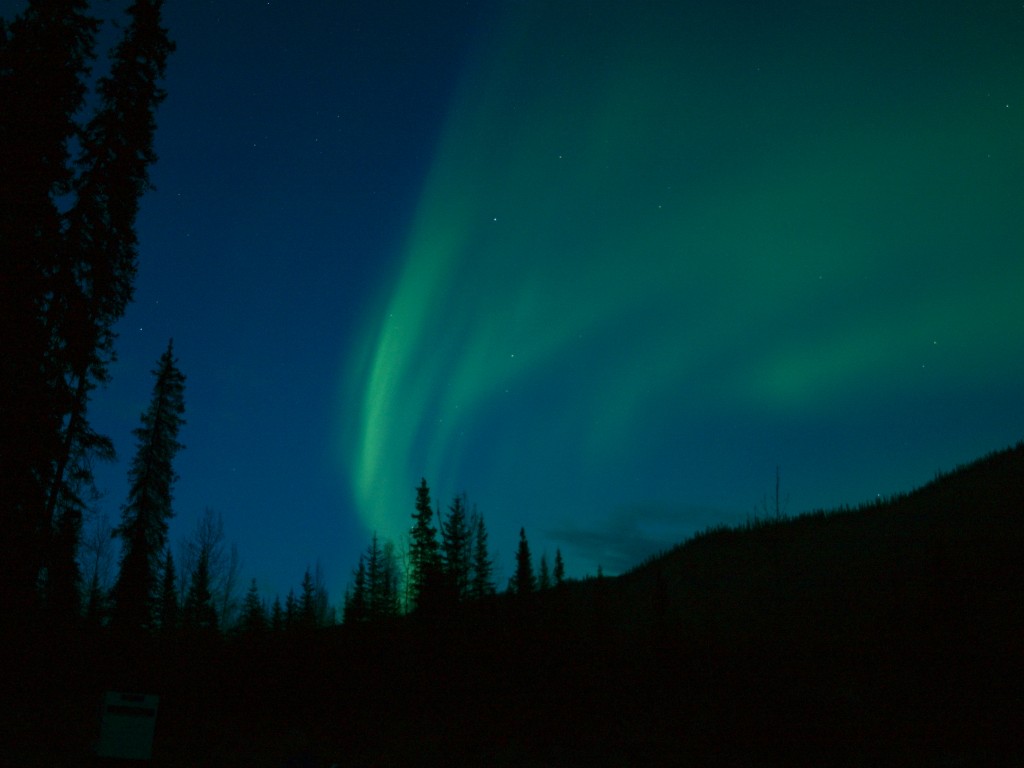 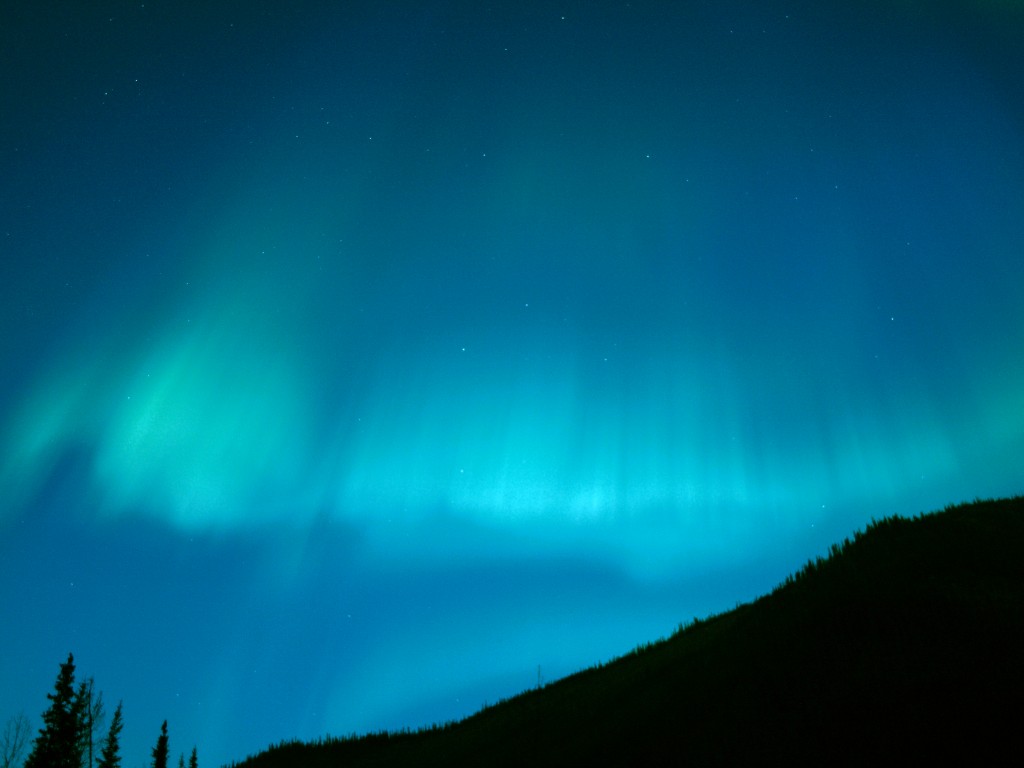 We encountered few animals on the trip.  This is described as a “hungry” part of the Yukon.  One bear tried to enter our camp.  It was a very large black bear, the electric fence slowed him down but it took a few bear bangers to scare him off.  A huge mangey wolf casually pranced right in front of us one night.  All the animals are big in the Yukon.  Even the mosquitoes.  They are so big that they often get up and fly away after you swat them.  Unless you are willing to really smack yourself in the face, they are not going to die. 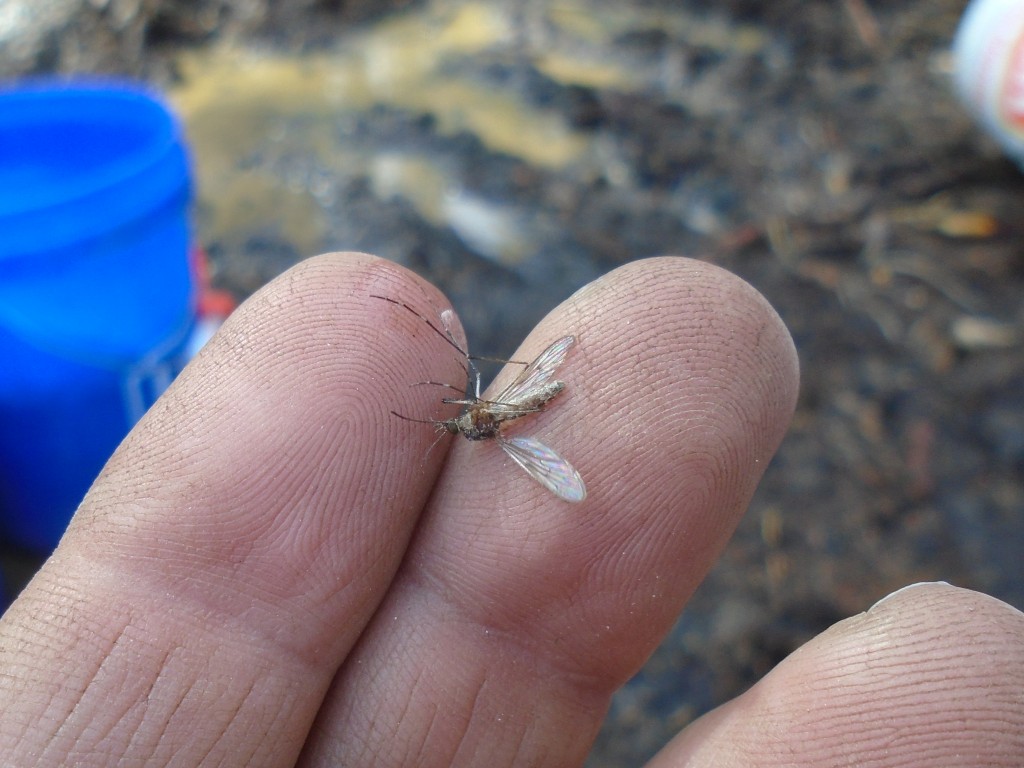 For some samples we had to use the excavator.  The auger drill does not work well in areas where the permafrost has melted.  We tried a few spots and the mixture of water and loose gravel would not stay on the auger flights.  The excavator does not have that problem since it scoops up a bucket full of material, water and all.  We used a huge 4″ pump to drain the holes first then sampled the bedrock and regolith with the hoe.  The samples were of course put into pails and we measured the volume before processing. 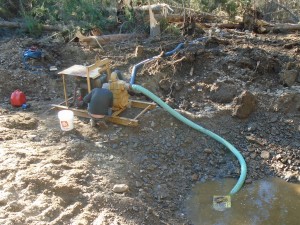 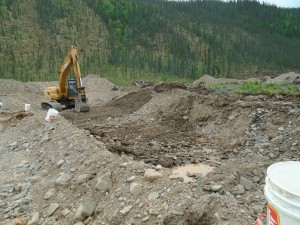 We had a few other machines to help out as well.  A couple of bulldozers, some quads, a side by side and a ’96 Toyota pickup with tracks instead of wheels.  We took the tracks off once the snow was all gone using the hoe to lift the truck.  Why bother with jacks when you have those Tonka toys kicking around. 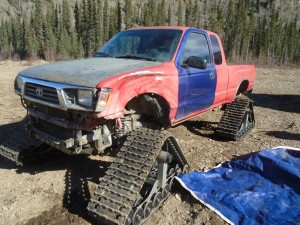 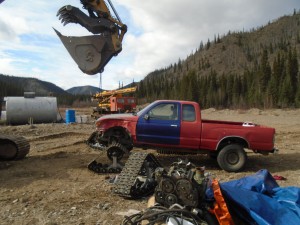 The winter trail conditions rapidly deteriorated as the weather warmed up.  The ground here is like muskeg with lots of water and mud.  Just about everything got stuck at some point, except for the Nodwells.  We had to cross a few creeks, mud and sometimes straight trough the trees. 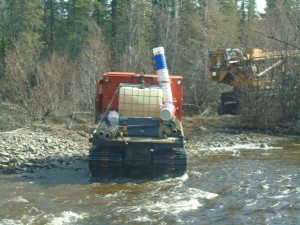 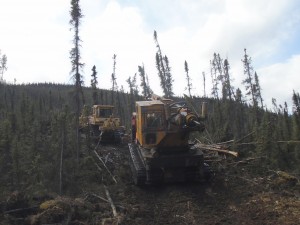 The pursuit of gold will make men do strange things.  In our case it involved a ton of work travelling over unforgiving terrain to drill holes down to bedrock.  Our persistence and determination paid off though and we discovered a pay channel that extends over much of the drilled area.  It is going to take some more work to map out the full extent but we already have clear evidence of a great deposit. 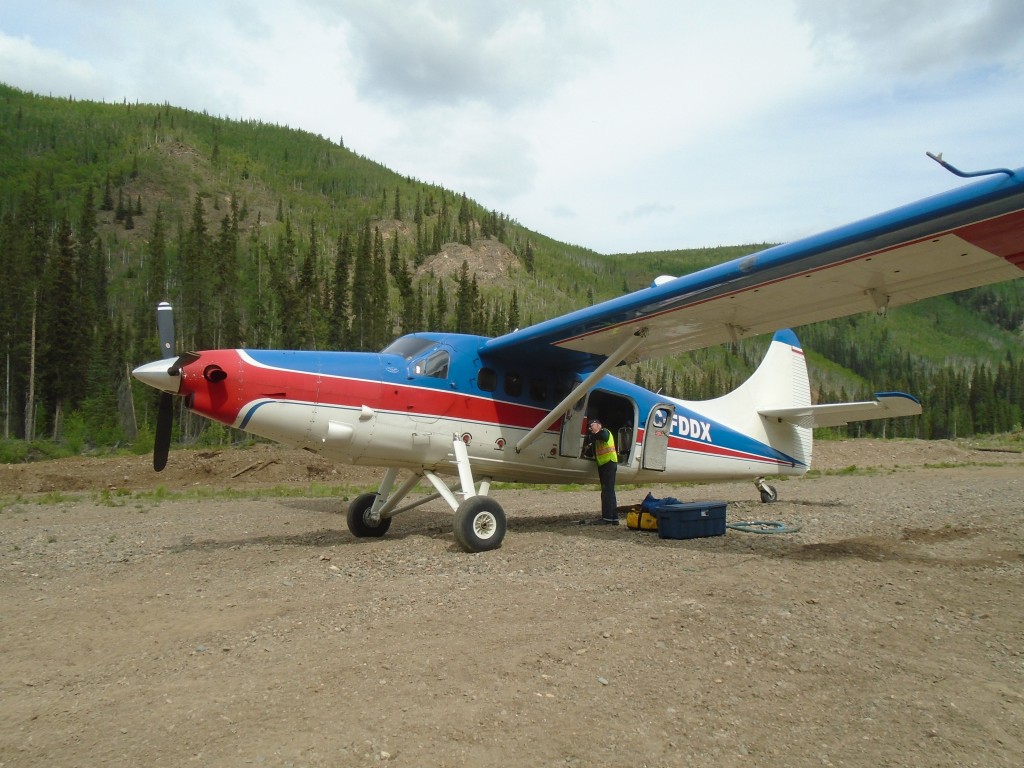 After 50 straight days it was time to go home.  Our ride out was a DHC-3 Turbo-Otter, an impressive aircraft designed by de Havilland, a Canadaian company, in the 1950s.  The Otter took our whole crew and all our gear without any issues.  The turbine engine gives it the STOL capabilities to takeoff and land in a rugged bush airstrip like the one in this camp.  We stopped along the way to drop off one of our guys and pick up some much needed beer before landing in Whitehorse.

I had a wild night in Whitehorse to close off the trip before heading home to BC.  It was a good time in the bush but it is nice to return to the comforts of modern civilization.