In April 2021 West Coast Placer was hired to assist in exploration for a large-scale alluvial gold project in Sierra Leone, West Africa. This program took place in the Kono region of Sierra Leone which hosts diamonds as well as gold in their placer deposits. It was a great experience and it was really cool to see how they do things in West Africa compared to the West Coast of North America. 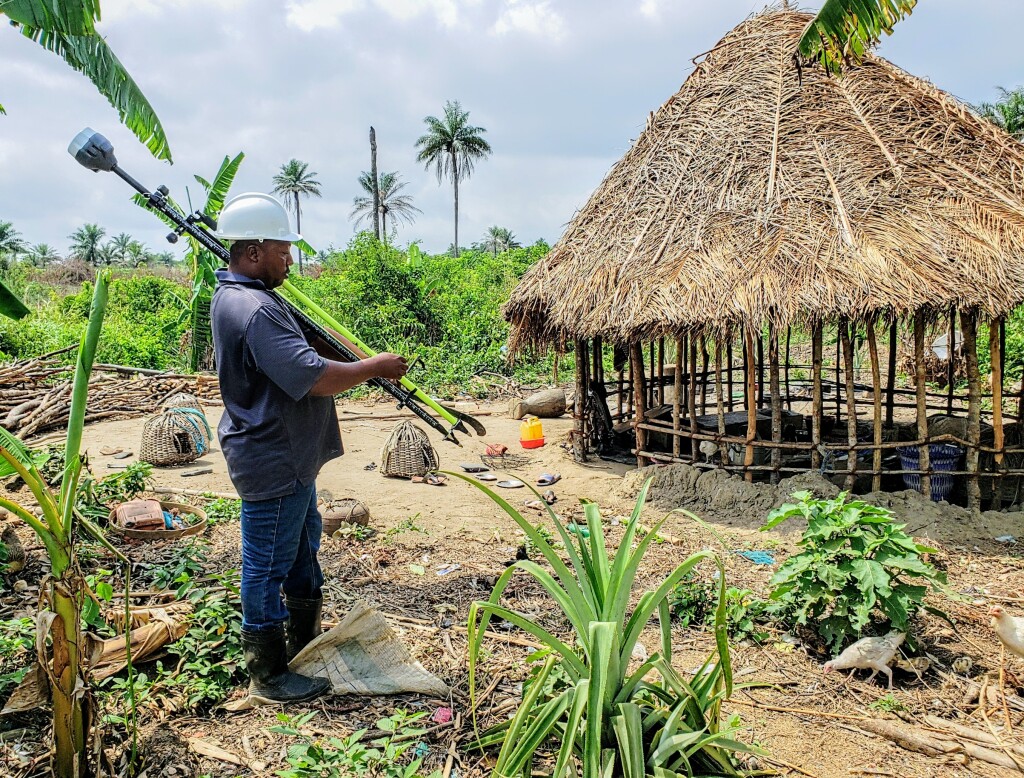 Sierra Leone is famous for its alluvial diamonds. We were working in the Kono district which is where the plot of the movie Blood Diamond took place. The region where Leonardo DiCaprio’s character died at the end (spoiler alert) is not far from the survey area that we were exploring.

Despite extensive diamond mining taking place in the region since the 1930s very little attention had been paid to the alluvial gold deposits. There are a lot of artisanal miners active in the area but their sole focus is diamonds and they often discard the gold that they dig up. That fact surprised me because even in Canada where the average income and standard of living is much, much higher nobody would ever throw gold back into a river. That’s one of many things that’s different in Africa. 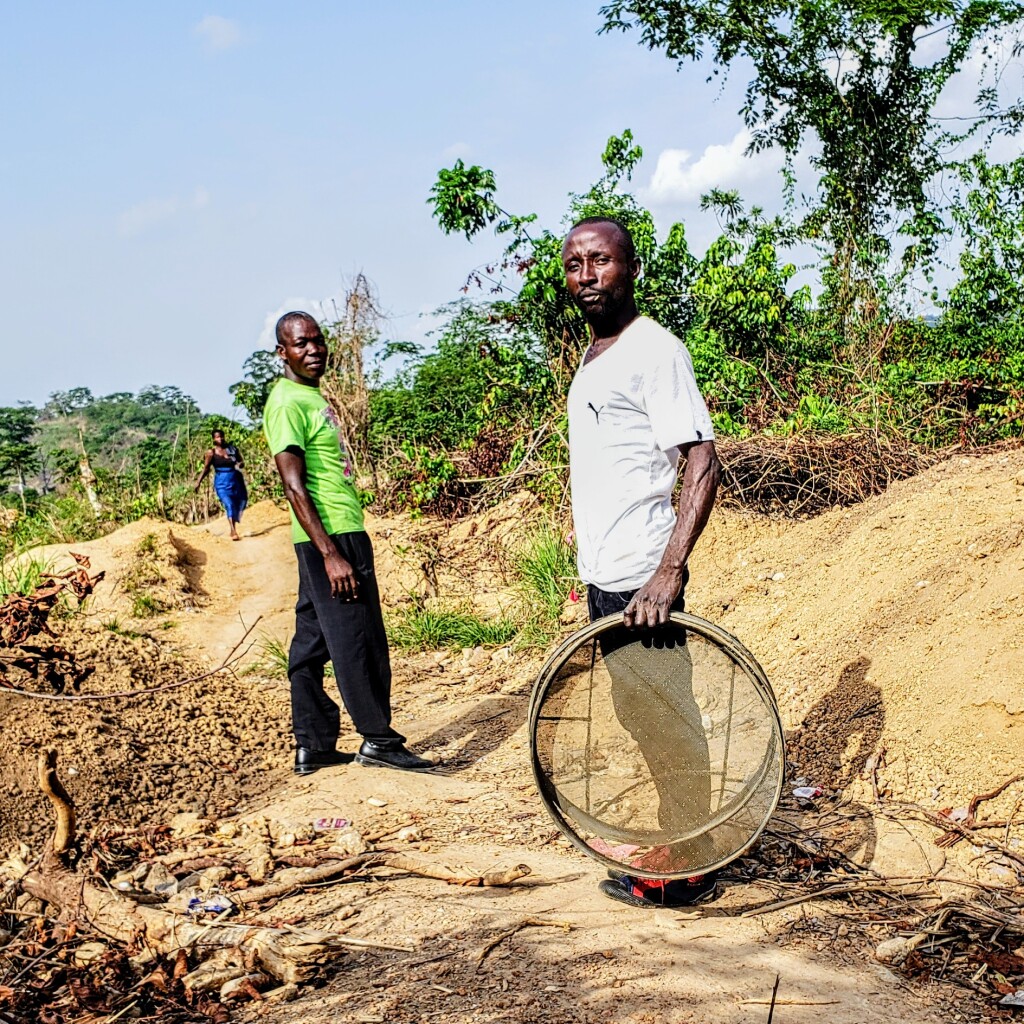 The placer deposits in the Kono region are much older than anything in BC or the Yukon. Much of the bedrock is Precambrian (500 million to 4 billion years old) and hasn’t ever been glaciated. By contrast, the rock in BC is less than 200 million years old and has been bulldozed by large glaciers on at least 4 occasions. Despite the differences, some things are the same in pretty much every placer environment. Over time rivers and streams move and leave their gold deposits behind in ancient paleochannels. That’s what we were looking for. Our system is designed to map bedrock depth and show the location of paleochannels.

Travelling internationally during the covid-19 pandemic is quite an adventure. In April 2021 the vaccines weren’t available yet and travel restrictions were very tough. We had to do lots of covid tests at each leg of the journey and there were a few hiccups. One of our team members wasn’t allowed to board the flight to Belgium from Montreal because his test was taken too far in advance. He had to get another PCR test and catch a flight the next day. On the way back I almost had to stay in a covid hotel, fortunately, the Canadian government honored my essential service exemption. 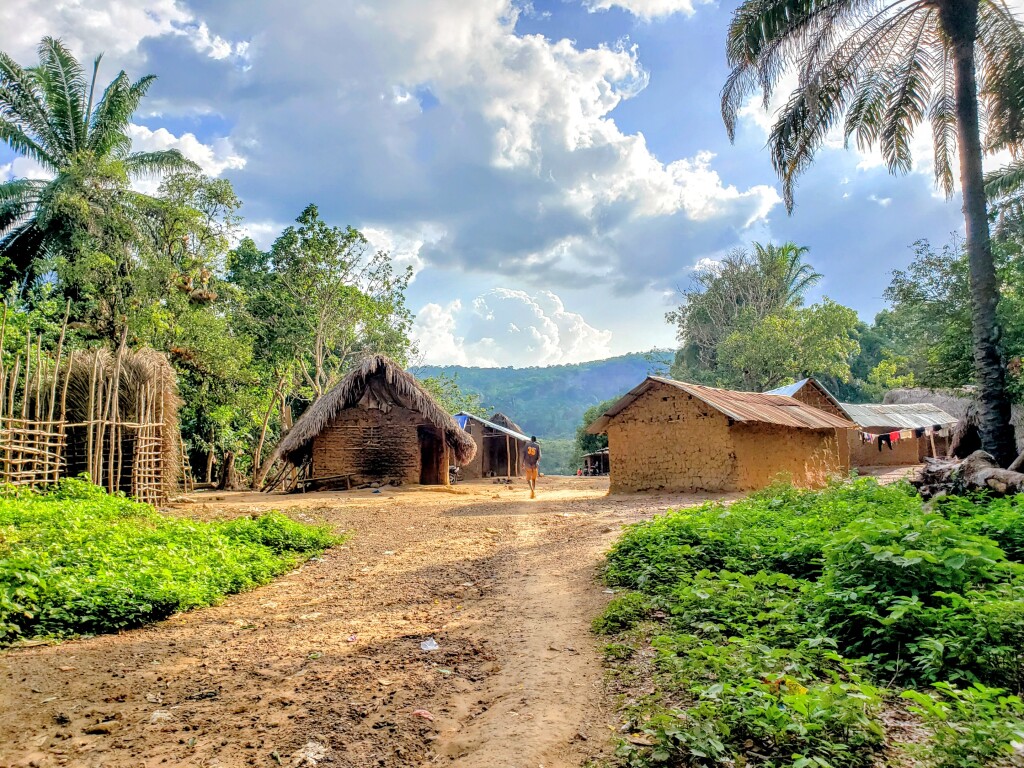 It was interesting that Sierra Leone didn’t have a lot of covid restrictions. That’s because three years prior to the breakout of Covid -19 around the world West Africa was center stage to the worst ebola outbreak in history. When covid broke out in 2020 they knew what to do and locked the whole country down with no exceptions. By the time we arrived in 2021 the whole country had a total case count of 80 and zero deaths. With the intense screening protocols for international travellers they were able to keep infection rates to a minimum, something that wealthy western countries weren’t able to do, even with the advent of vaccines.

We spent a few nights in the capital city of Freetown and headed off to Koidu Town to begin our exploration. The bedrock mapping survey covered a large area that was chosen due to the prevalence of artisinal mining and topographic features that favoured the development of paleochannels. We had some knowledge of hard rock gold production in the area and anecdotal evidence from local artisanal placer miners.

We had a crew of local laborers which included the son of the Paramount Chief. That was important for public relations since we didn’t speak the local language and it was important to explain to the villagers what we were doing. Having the chief on our side let everyone know that we were working along with local government and not just rolling in to take all the resources for ourselves.

Sierra Leone is ruled by a combination of federal government and chiefdoms. The mining claims are managed by both levels of government in a complex way. Without the support of the chief it would be hard to get the necessary permitting and support of the local community. Luckily for us, the local chief is a miner himself and we got along really well.

The artisanal miners do a lot of the work by hand. They often use gas-powered water pumps similar to what small-scale miners use in Canada. Mostly for dewatering though, they don’t have highbankers like we do back home. In Africa people carry everything on their heads, even the water pumps. 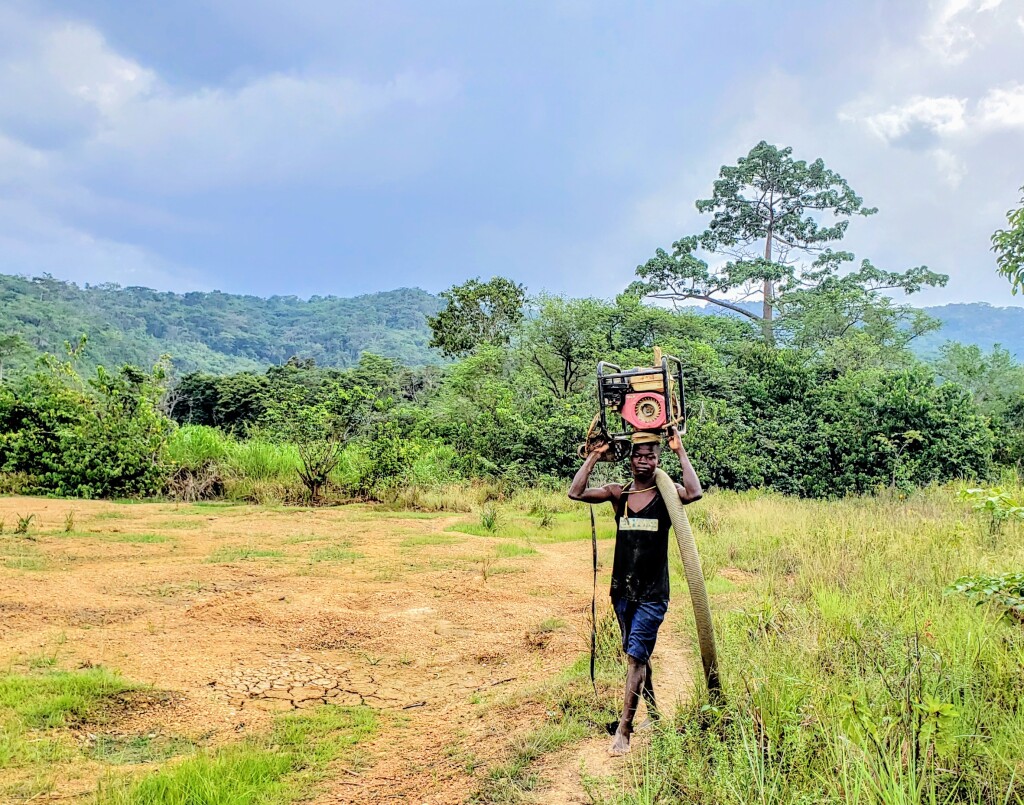 Most of the washing is done by hand using gem screens or large gold pans. The larger operations use a rudimentary hydrostatic jig. There are very few operations using heavy equipment but manpower is readily available in this area.

The local miners have a method of digging shafts that works really well in the clay-rich gravels in that area. They dig a shaft about 1 meter wide and dig out foot holds on the way down. In this way they can reach bedrock in a day or two and get really good samples from the bedrock interface. The company that we were working with hired a large crew of local miners to dig shafts instead of using a drill. The samples were better and expert shaft diggers were more than willing to work for $10 US per day.

Getting supplies in a third world country can be an adventure in itself. We tried to bring everything that we needed with us but we counted on procuring some supplies locally. One thing that we need lots of was flagging tape. Since this is a mining area we thought it wouldn’t be too hard to find. It turns out that there is no flagging tape available for sale in the entire city of Koidu. Despite two full-scale kimberlite mines right next to the city. We had to buy fabric ribbon in bright colours and use scissors to cut it in order to mark our lines.

It turned out that the local kids like the fabric just as much as we did since they would come right behind us and pull all the ribbon off the lines as soon as we were done. Sometimes they wouldn’t even wait till we had completed the line which made a few sections really challenging.

Some of the more high tech mining devices in Africa are really cool. The company had some really efficient gold centrifuges for testing the gravels. They’re like a gravity concentrator that you see in North America but made to be economical and easy to deploy. One machine is called the Gold Kacha and works really well. 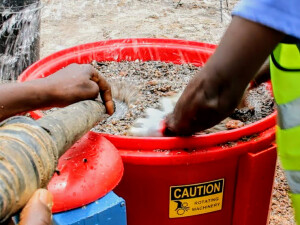 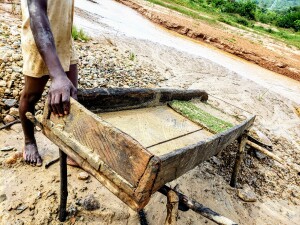 Centrifuges aren’t commonly used in placer mining in BC and the Yukon but that’s something that we should really consider. The gravity concentrators on the market are expensive in Canada but you can get a Gold Kacha out of South Africa for about the same price ad an average highbanker setup here in BC.

The local gold panning technique is quite different from what I’m used to. They use a large rounded bowl with handles on the sides. There are no riffles and the sides have a very gentle slope. My technique didn’t work to well with their pans. The local technique is to swirl the material in the pan while letting the lighter stuff wash over the sides. One of my crew members demonstrated the technique in the video below.

The bedrock mapping survey was a huge success. We identified a clear paleo-valley and an ancient river channel that spanned several kilometers. Much of the area that we identified with the seismic survey as an ancient channel had never been exploited by artisanal miners.

One great thing about working in Sierra Leone is you don’t need permits as you do in BC. We were able to start digging with an excavator right away. With a combination of bulk sampling with the excavator and teams of local shaft diggers sampling was completed in less than a month. The gold grades within the channel were excellent and alluvial diamonds were also present. 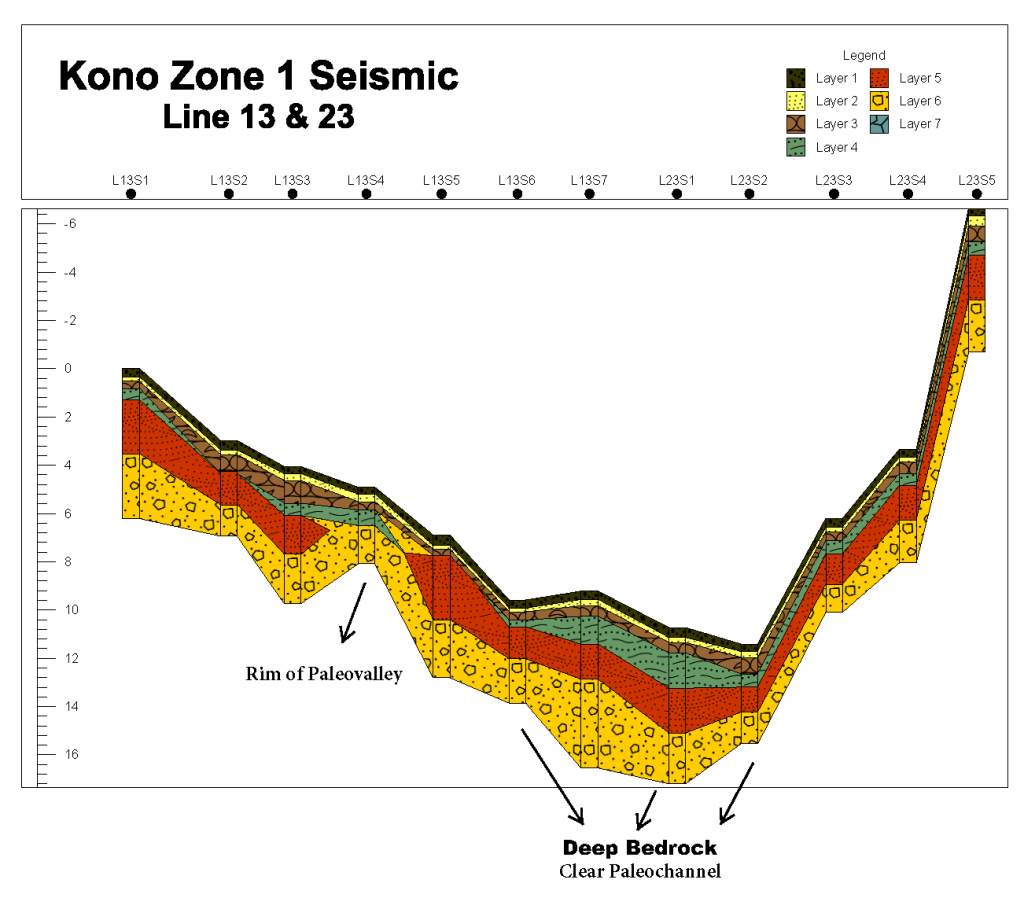 Exploring a new area is always a welcome experience. As explorers, we are constantly striving to search different areas and locate mineable gold deposits. This exploration program in West Africa did not disappoint. It was quite a contrast to use the latest technologies in an area where people are still living in mud huts and cooking with charcoal. Some of the ancient techniques used in Sierra Leone are very efficient, such as the shaft digging technique. If we could get hundreds of workers to dig shafts in Canada for $10 per day imagine the ground that could be explored.

We managed to locate a very rich placer deposit containing minable quantities of gold and alluvial diamonds. This project was developed with the support and mutual benefit of the local chiefdom and communities. It was a great experience to share knowledge of different mining and exploration techniques and learn a few new ones as well.